Is gene therapy really safe? Though most say yes, no one is absolutely sure 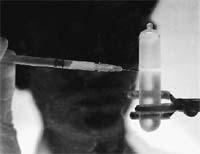 tampering with genes in human sperm and eggs is outlawed, as any unforeseen side effects would be passed on to future generations. However, us health officials are worried that the human repro-ductive cells may have accidentally been contaminated during gene therapy trials.

Therapeutic genes are usually shuttled into the body inside "vector" such as viruses or loops of bacterial dna called plasmids. But researchers have no way of restricting these vectors to only those tissues that need gene therapy. So patients have always been warned that germ line contamination is a potential threat and have been advised to use barrier methods of contraception.

Most of those treated so far have been terminally ill, and were not very likely to consider having children. However, as researchers develop gene therapies for less serious conditions, the us Food and Drug Administration (fda) and the National Institutes of Health (nih) have become alarmed at reports of vector dna sequences showing up in the *gonads* of experimental animals - and, in one case, a human subject.

"This is not a rare thing," says Philip Noguchi of the division of cellular and gene therapies at the fda. In January, when the nih asked researchers for information, many had confirmed seeing vector sequences in the gonadal tissue of animal studies. A team from Glaxo-Wellcome at Research Triangle Park in North Carolina, for instance, used a nasal spray to treat rats for cystic fibrosis and found the therapeutic plasmid in the rats ovaries, testes and seminal vesicles.

At the University of Pennsylvania in Philadelphia, a team led by Nelson Wivel used gene therapy to treat liver-enzyme deficiencies. When they used the polymerase chain reaction to look for their adenovirus vector in rat tissue, "just about everything in the house lit up, including gonads".

Most worryingly, researchers at Introgen Therapeutics in Houston say testicular tissue from a man who died after taking part in a gene therapy trial for cancer initially tested positive for gene vector.

The big question is whether vector sequences are getting into sperm and eggs, or merely the surrounding tissues. The Introgen team told a nih panel that there was a high possibility that the samples were cross-contaminated during collection or processing", since tissue from within the testes tested negative.

Animal experiments also provide some reassurance that sperm and eggs are not being contaminated. Wivel gave male and female rats large doses of his viral vector and then mated these and analysed their offspring. "Out of more than 800 foetuses, we did not get a single positive," he says.

Esmail Zanjani of Nevada Univer-sity in Reno injected sheep foetuses with a retrovirus containing a genetic marker. The males' semen later tested positive for the marker, but purified sperm were negative.

Nevertheless, the fda wants resear-chers to find better methods for testing the germ cells of their human patients. "No one is taking up the gauntlet," complained Noguchi. "This is not something that we have to deal with tomorrow."