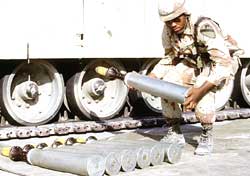 Even as the Pentagon looks the other way, health issues related to depleted uranium (du) use in Iraq have come up. Two states in the us, Connecticut and Louisiana, have passed legislations that will provide their National Guard troops access to tests which the department of defence denied them. Connecticut's new law came into effect from October 1, 2005. Eighteen other states are considering similar steps.

The Pentagon has so far refused to admit that troops have been exposed to du. It subjected randomly selected troops to routine urine sample tests and claimed no traces of du were found. But experts opine that urine tests, if conducted 30 days after exposure, are useless as most of du leaves the body or migrates into bones or organs. Significantly, The New York Daily News found that four out of nine soldiers tested positive. Reporters of the Christian Science Monitor had measured radiation levels in four different sites around Baghdad in the early days of the Iraq war. They found levels at least 1,000 to 1,900 times higher than normal. In Iraq, more than 3,000 tonnes of DU have been used.

When the war began, the US refused to allow un or other environmental inspectors to test du levels within Iraq. Now the un won't go near Iraq because of security concerns.