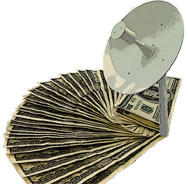 Myanmar's military junta has dramatically raised the annual fee for tv satellite dishes, an apparent move to block the foreign news channels that beamed in global criticism of its recent crackdown on pro-democracy protests.

An official at Myanmar Post and Telecom, the country's regulatory authority, confirmed as much. He said it was meant to discourage people from watching foreign news channels. The license fee has rocketed from us $5 to us $800--an unaffordable sum to most people in Myanmar. It is equivalent to about three times the annual salary of a public school teacher.The new fee was imposed without warning.

"The government is trying to shut our ears and eyes,'' said Thant Zin, a civil servant. Some residents said they would be forced to give up satellite tv, while others said they would risk fines and secretly keep their dishes in place.