Mystery fever in UP linked to toxic plant 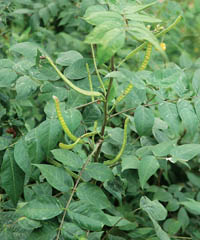 for the last 20 years, a mystery fever has baffled physicians in western Uttar Pradesh. Several theories have tried to identify the fever, but there has been more confusion than clarity (see box Unidentified assassin), all the time taking a rich toll an average of 400 children die each year due to the fever, with physicians and medical researchers failing to provide any reason for the deaths. In the absence of another name, it has come to be called the Saharanpur fever, after one of the worst hit districts.

Clueless about the identity of the disease, authorities have vaccinated children in the area against Japanese encephalitis (je) as a precaution. je is one of the possible causes of the mysterious fever but not many in western up tested positive last year.

While the region is waiting for the next attack, a group of doctors have come up with another explanation for the mystery disease toxic pods of the weed Cassia occidentalis, which children--especially the ones from poor families--ingest accidentally.

The weed, commonly called kasondi or pamaad, is found in plenty near the localities that reported the deaths. Many of the deceased children had reportedly eaten the pods, some while playing the 'kitchen game'. The pods look like commonly consumed vegetables.

Doctors carried out a series of three studies on children suffering from the disease. In the first study, they defined the disease on the basis of symptoms and pathological tests. It was found that children aged between two and four, coming from poor families, were mostly at higher risk. All of them showed similar symptoms vomiting, fever and abnormal behaviour. The symptoms were different from those of je. No microorganism could be isolated from serum and internal organs in pathological tests. The researchers thus suggested that the symptoms could be due to a phytotoxin (plant toxin), and called the disease hepatomyoencephalopathy it affects the liver, the brain and muscles.

The second and the third part of the study, which involved detailed interviews with the deceased children's families, revealed that the children had eaten the Cassia pods.

The findings have been presented in a series of papers; the last one appeared in the journal Indian Pediatrics (Vol 44, July 17). The research team included Vipin Vashishtha, a physician in western up, N C Nayak, a pathologist from Sir Ganga Ram Hospital in Delhi, Amod Kumar, an epidemiologist from St Stephen's Hospital in Delhi, and T Jacob John, a virologist formerly with the Christian Medical College in Vellore.

The people in the area are unaware of the weed's toxicity, though they are aware that cattle don't consume it; there is evidence of the plant affecting cattle in scientific literature, but no record of it affecting people. The pods are said to have many alkaloids that affect the liver and skeletal muscles. "We need an awareness campaign about the toxic effects of Cassia pods," says Vashishtha.

In Ayurved, the plant is used to prepare medicines for jaundice as well as to treat chronic cough. Ayurved experts agree that the plant could be toxic if consumed in large quantities.

The researchers feel the study is a definite and conclusive evidence against the plant's toxic characters. "Other species of Cassia should now be studied for toxicity," says Sarvesh Kumar, joint director of the Botanical Survey of India, Dehradun. According to the president of the Indian Academy of Paediatrics, Naveen Thacker "The task of prevention must begin now."