Fever killed 277 in Uttar Pradesh. No one knows the cause 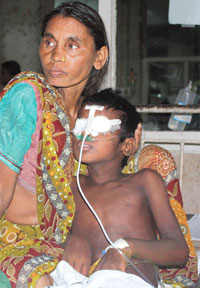 ALREADY battling with Japanese Encephalitis, eastern Uttar Pradesh is now under the grip of a mystery fever. Till September 16 this year, 277 children died in 12 districts of the region. The physicians and scientists remain clueless about the genesis of the disease.

Though a surge in deaths between July and October is usual in this part of the state, it was earlier attributed to Japanese Encephalitis. After a major outbreak of the disease in 2005, when around 1,000 children died in eastern UP, the government launched a vaccination drive in 2006. But even after that children kept dying. It was suspected to be another form of encephalitis. Now the doctors and scientists working in the region are blaming a different class of viruses, enteroviruses. They do not even rule out the possibility of a new pathogen causing the outbreak.

“Of the 277 deaths this season, only 35 have been confirmed due to encephalitis,” said Arvind Kumar, district malaria officer who is monitoring the Japanese Encephalitis outbreak in Gorakhpur. He said the rest of the deaths could be because of other pathogens. A team from the National Institute of Virology in Pune has been camping in Gorakhpur for the past two years to identify the cause of the yearly outbreak. “Only 16-20 per cent cases suspected of encephalitis tested positive between August and September this year,” said Ashok Pandey, scientist at the institute who is working in Gorakhpur.

 Though rectal swabs of 35-40 per cent of the patients are showing the presence of enteroviruses, Pandey dismissed the claims that they are the culprit. “Enteroviruses thrive in the intestine of the patients and attack their nervous system. These viruses are nearly absent in the cerebrospinal fluid samples of the patients,” he noted.

Enteroviruses include ECHO, coxsackie and polio virus. They are difficult to identify; they have high mutation rate and it is not easy to determine when they are active, said K P Kushwaha, head of paediatrics, BRD Medical College in Gorakhpur, the nodal centre to treat encephalitis patients in eastern Uttar Pradesh. “The patients are being given symptomatic treatment,” he added.

Virologists recommend a thorough research. “It is very unlikely for a virus to remain in one part of the country for this long. We are definitely missing on something,” said T Jacob John, retired professor, clinical virology department, CMC Vellore. He said one should learn from the experience in Saharanpur. “For 20 years, we thought the outbreak in Saharanpur was encephalitis but it turned out to be plant poisoning,” John added. K K Dutta, former director of the National Institute of Communicable Disease, said, “The disease can be another form of Acute Encephalitis Syndrome. It could be anything, bacteria, fungi or a virus.”

Unlike Japanese Encephalitis, which is vector-borne, enteroviruses spread through faecal-oral route. Doctors say poor sanitation conditions in and around Gorakhpur help the virus spread. “Most houses in the nearby areas of Gorakhpur do not have toilets and people defecate in the open,” said Kushwaha. 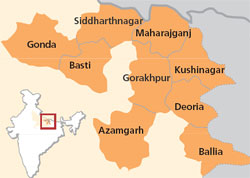 Residents of these areas wash their hands using mud and the groundwater level is very high, increasing the chances of contamination. Besides, topography of the region favours level of the river Rapti to remain higher in Gorakhpur, making water-logging common. Experts say the only way to counter the problem is to maintain hygiene. “Usually, poor people are the most vulnerable. Lack of clean drinking water and sanitation facilities make it worse,” said Pandey.

The state finance commission has reduced the development funds to the district from Rs 54 crore last year to Rs 38 crore. The infrastructure at the hospital is also inadequate to handle the rush of the patients. The 108-bed BRD hospital is brimming with patients and two to three children are sharing one bed, the mayor said.