Nailed by a photo 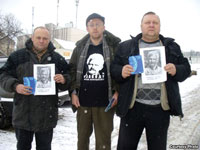 A court in the western city of Hrodna has convicted three human rights activists, Uladzimer Khilmanovich, Viktar Sazonau and Raman Yurhel, for participating in an unauthorised demonstration on International Human Rights Day (December 10).

But the men were not arrested at the time of the demonstration, but after a photo of them protesting was published online. In the photo, they are holding a portrait of Ales Byalyatski, a human rights leader who was sentenced to four and a half years in prison in 2011. Byalyatski’s supporters say the charges are politically motivated.