Nailing the lie of the land 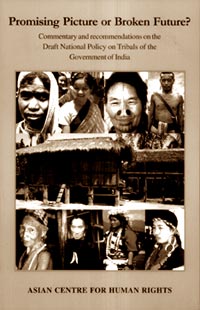 Promising Picture or Broken Future? Commentary and Recommendations on the Draft National Policy on Tribals of the Government of India by Suhas Chakma Asian Centre for Human Rights, Delhi p153 Rs 350

What does one do but fume with anger when the nation's policy on tribal societies refers to them as 'primitive'? Yes, that is exactly how the first Draft national Policy on Tribals of the Indian government describes tribals at one place, and the tenor persists throughout. The policy, coming 54 years after the first notification of the country recognising scheduled tribes in 1950, might be a welcome step. But it is most definitely tilted in the wrong direction. Not surprisingly, it has raised the hackles of tribal groups as well as voluntary agencies who work with tribal communities.

In the last six months this document has been furiously discussed throughout the country, especially in tribal dominated belts of Northeast and central India. But till date there is precious little in print, that critiques the policy . Suhas Chakma's Promising Picture or Broken Future? therefore comes as a timely intervention. It will provide a perfect compendium of hard information for anyone who wishes to scramble through the unwieldy draft policy document.

Chakma picks up his argument by digging up the basics. He goes into the very semantics of discussions on tribal policy and recollects debates in the constitutional assembly on whether tribal communities should be referred as v anvasi (forest dwellers) or adimjati (primitive races). He highlights how the ruling political class' attitude towards tribals remains moored in its parochial biases of the past.
<>< damning=""> Immediately after, the book gets into substantial and immediate concerns. The vast array of data assembled by the author takes this book beyond mere rhetoric. For example, Chakma takes up the education policy for tribals enunciated in the draft and rubbishes its tall promises by showing how the government has obstinately refused to review its existing programmes and education projects in tribal areas -- this, despite repeated failures and wastage of hundreds of crores of rupees every year. He then shows how gaps in school drop-out rates between tribals and the rest of the population keeps increasing over time. Chakma backs up his recommendations with reports of the Joint Parliamentary Committee (jpc) on Welfare Of Scheduled Castes and Scheduled Tribes of the 13th Lok Sabha.
The critique gets even more vehement on the contentious issues of displacement and forest and land rights. These issues form the basis for tribal angst in India, today. The book exposes the draft's nave suggestions and brings out their irony by counterposing forest laws with land acquisition laws and other legislation that overrides tribal rights. Chakma argues that failure to address these legal anomalies would render the draft toothless, even if it moves in the right direction.

Chakma in fact goes beyond the draft national policy by critiquing the present system of governing tribal (scheduled) areas. The Constitution makes it mandatory for the governor of each state with scheduled areas to submit a report on the governance of such areas. But the jpc clearly mentions that these reports remain inadequate (the authors use the example of Madhya Pradesh). To reiterate his point about governance in tribal areas, the book exposes the farce that Tribal Advisory Councils for scheduled areas have become. Though meant to guide and advise on all issues of tribal policy, they have remained paper tigers -- they are seldom formed, rarely meet and scarcely anybody listens to them.

The evidence Chakma presents is damning. But it is neither cynical nor vitriolic. The book has its set of recommendations. Some of which pragmatic observers, might think is asking too much of the government. But those who have negotiated with it know you don't get an inch unless you bargain for a mile. The book could have done with more systematic presentation: that would have helped remove some repetition. But, that does not take anything away from its value. The book is a handy manual for those who want to lead the debate or understand it thoroughly.