It has finally been proved that nicotine is what gets smokers addicted to the habit. Nicotine produces the same impact on the brain as other psycho-stimulant drugs 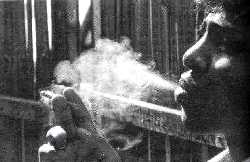 it is a known fact that smoking is injurious to health, but it is only recently that nicotine, the neuroactive compound in tobacco, has been proved to be addictive. Nicotine was often thought of as a weak reinforcer when compared to other drugs like cocaine and heroin and was therefore considered as being more of a 'habit-inducer' rather than being addictive. Italian scientists Francesco E Ponteri of the department of neuroscience at the University of La Sapienza in Rome, Francesco Orzi of inm Neuromed in Pozilli, and Gian Luivi Tanda and Gaetano Di Chiarea of the University of Cagliari, have provided the first functional and neurochemical evidence that there are specific neurological factors shared in common by nicotine and other addictive drugs.

The fact that nicotine is a powerful addictive drug was suggested by the influential American Surgeon General Report as early as 1988.In 1995, I P Stolerman and M J Jarvis published a paper in Psychopharmacology, providing convincing similarities between nicotine and a number of addictive drugs like cocaine, amphetamine and heroin. But there still remained a doubt over whether it was smoking or nicotine which was addictive, and clear cut scientific evidence eluded scientists.

The present study, however, puts these doubts to rest. The scientists observed that in rats receiving small intravenous doses (0.05 mg/kg) of nicotine, there occurred a highly selective increase in the release of dopamine and an activation of energy metabolism in the precise region of the forebrain that gets activated by the intake of cocaine, amphetamine and morphine.

The same group reported 10 years back that nicotine can mimic other addictive psycho-stimulants and cause the release of dopamine from the nucleus accumbens. Their new results strengthen their evidence in that they have recorded separate measurements of the dopamine released and the energy metabolism in the subdivisions of the nucleus accumbens known as shell and core. The shell is key link between the mid-brain and forebrain, playing a role in motivational and emotional functions, while the core is involved in the coordination of movements.

In the developed world alone, close to three million people die each year due to tobacco, half of them being smokers below the age of 70. These numbers account for almost a quarter of the total number of deaths. In India, over 25 crore men and women smoke and of these roughly eight lakh die each year. As many as eight different cancers are known to be directly caused by smoking. Further more, six potentially fatal diseases are also linked to smoking and these include coronary heart disease. Anti-smoking campaigns using the new evidence of the addictive effect of nicotine, would perhaps be better equipped to deal with this public health menace.