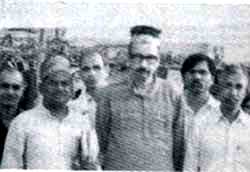 The public humiliation of B D Sharma, social activist and former Commissioner of Scheduled Castes and Scheduled Tribes, has stirred up a hornet's nest. "It has come as a shock to all of us... But what else can you expect from the fascist regime of (Madhya Pradesh chief minister) Sunderlal Patwa?" asks Arvind Netam, Congress member of parliament from Bastar, where the incident occurred. Sharma was allegedly assaulted, stripped, garlanded with chappals, and paraded through the streets of Jagdalpur for two hours.

Sharma had led a tribal protest against the setting up of a steel plant in the mineral-rich Bastar district by S M Dyechem on about 2,000 ha of land, 1,200 ha of which comprises tribal agricultural land. Some 10,000 tribals walked to Jagdalpur and submitted a resolution to the district collector registering their protest. They also sought clarifications about the project and contended when the government could not provide them jobs, there was no guarantee the private sector could. Sharma's involvement with tribals began two decades ago when. As district collector of Bastar, he made several public-sector engineers marry the tribal women they has taken as mistresses.

But the Rs 2,500-crore plant, announced one fine day in October, is a pet of Patwa's and so far, only a police case has been registered. Human resource development minister Arjun Singh and numerous activists have demanded a public apology from Madhya Pradesh chief minister Patwa. The image of the BJP government in the state has already been tarnished by the murder of trade union leader Shankar Guha Niyogi.