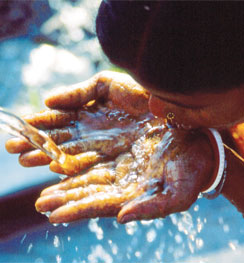 MILLIONS in India and Bangladesh are at risk due to arsenic contaminated groundwater. Drinking such water can result in diseases like high blood pressure, abnormal thickening of skin and liver and prostate cancers. The methods to filter arsenic from drinking water are limited and costly. Commonly, alumina (aluminium oxide)-based materials like activated alumina are used to filter the contaminated water. As water passes through it, alumina adsorbs arsenic. But these materials have a drawback. They form metal hydroxides in water and reduce the efficacy of the adsorbent.

An innovation by researchers from University of Calcutta could prove useful in tackling this problem.

They have designed a new kind of arsenic-adsorbing material by using alumina nanoparticles. The nanoparticles are mixed with a polymer—polyacrylamide—to which chitosan (an element derived from the skin of crustaceans) is added. During experiments, it was found that the adsorbing power of the material increases with increase in arsenic concentration. To test the efficacy of the material, the researchers put the adsorbent into three different aqueous solutions containing varying concentrations (25, 50 and 80 ppm) of arsenic. The reason behind better adsorption, researchers say, is that since arsenic is negatively charged and alumina is positively charged, they attract each other in water. Further, the polymer makes bonds with the arsenic ions, providing for more adsorption.

The researchers also tested the potential of the material in the field. They took 25 ml of arsenic-contaminated drinking water from Baruipur, a city in the South 24 Pargana district of West Bengal. The water sample had arsenic levels 50 times the WHO permissible limit of 10 microgramme/litre. To it they added one gramme of the adsorbent. They found that after the addition there was no traceable levels of arsenic in the water sample. The researchers also found that the removal of arsenic was dependent on the pH (alkalinity and acidity) of the water. The pH of water is around 7.2 even with impurities. “Adsorption capacity of the material increased from 45 per cent to 99.5 per cent as the pH of water changed from 4.0 to 7.2 and then decreased with further increase,” says lead researcher Priyabrata Sarkar.

The new adsorbent is cheap. It will cost just Rs 1.10 to remove arsenic from a litre of drinking water having arsenic concentration 30 times WHO’s limit, researchers say. The adsorbent can be reused by removing arsenic from it after treating it with alkali or acid. The study was published in the August 15 issue of Journal of Hazardous Materials.