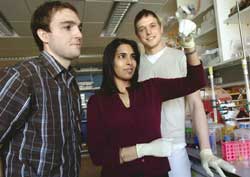 a team of scientists headed by Sangeeta N Bhatia of the Massachusetts Institute of Technology, usa, has found an easy way to detect cancer using magnetic resonance imaging (mri).

The technique is based on iron oxide nanoparticles which show up on mri scans (because iron has magnetic properties). It does not require invasive and expensive methods of cancer detection such as biopsies and histology, which are also not very accurate.

The new technique uses iron oxide nanoparticles coated with two biomolecules, biotin and neutravidin, that attract each other. To prevent them from sticking together, polyethyleneglycol (peg) chains are added to the particles. The peg chains break when the nanoparticles come near a tumour. This is because of the action of enzymes called metalloproteinase, which only tumours produce. Once the peg chains are broken, the particles aggregate and their magnetic field becomes strong enough to be read by an mri scan. The findings were published in Angewandte chemie (Vol 45, No 19, May 10, 2006).

The group has tested the technique on breast cancer. It may help detect other types of cancers, too. The group holds a provisional patent on the technique and is testing it in animal models. The technique could also be used to carry medicines to the cancer tissue, reducing the dependence on methods such as radiation and chemotherapy that cause severe side effects.