Nanoparticles are harmful, but India is yet to regulate their use

NANOTECHNOLOGY has revolutionised industry. It is used to improve wide ranging products, from cosmetics, toys and toothpastes to textiles and missiles. Industry thinks the technology holds promise to change every facet of life in some way.

Substances at nano scale, or nanoparticles, demonstrate novel physiochemical properties compared to larger particles of the same substance. Their use thus helps improve products. But their safety to human health and the environment has not been under-stood well.

This despite the Indian Institute of Toxicology Research (IITR) calling it toxic and recommending guidelines in February this year for their safer handling in research laboratories. The report was authored by a team of scientists called Nanomaterial Toxicology Group. IITR receives funds from the Nano Mission to conduct research on the impact of nanoparticles.

“The aim is to help the government introduce a policy on nano safety,” says Mukul Das, one of the authors of the guidelines. “We have sent our document to the regulatory authorities and are waiting for the guideline’s implementation on national level.” But it seems doubtful considering DoST’S past approach towards the subject. Of the Rs 1,000 crore earmarked for Nano Mission, DoST set aside only Rs 9 crore for assessment of the hazards of nanotechnology. “We do not know who will regulate what,” says Praveer Asthana, director of Nano Mission. At present, the department is orchestrating a debate and a taskforce to make a regulatory framework, he adds.

Under the Nano Mission, research institutes across the country were given projects to develop and promote products using nanoparticles. Some of these were commercialised and rolled into the market. At present, there are more than 200 nanoparticle-based products.

Other agencies have also made little effort to formulate a policy. In 2006, National Institute of Pharmaceutical Education and Research (NIPER) launched a programme to formulate guidelines for use of nanotechnology in drug delivery. After five years, there is no word on its progress. K B Tikoo, head of the nanotoxicology department at NIPER, justifies the delay. “Guidelines take long to be formulated,” he says.

“Is the government waiting for mishaps to happen? They can’t treat us like guinea pigs,” says Gopal Krishna, convenor of ToxicsWatch Alliance, an environmental non-profit. Separate researches on the ill effects of nanoparticles are being carried out. But most are inconclusive still. However, there is evidence that nanoparticles are harmful and regulations on their use are essential.

In 2009, the Drug Controller General of India (DCGI) recalled Albupax, a nano-based medicine for breast cancer. US firm Abraxis BioScience had complained against the maker Natco Pharma of Hyderabad, saying the drug damaged liver. The generic failed the DCGI test.

The same year deaths of two factory workers were reported in China. At least six workers of the same factory developed serious lung ailments. Researchers at Chaoyang Hospital in Beijing linked these to continued inhalation of nanoparticles. The factory was making paint with nanoparticles. 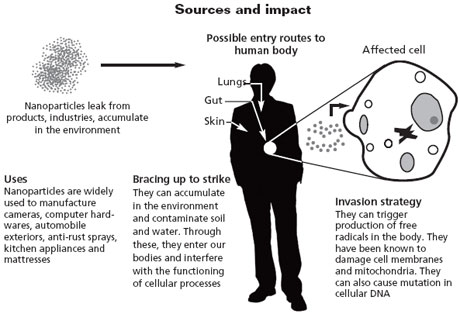 “In medicines nano particles are so tiny that they can pass through the blood-brain barrier,” says Barry Castleman, environment engineer and consultant. “They are toxic, but this is little understood”. Carbon as graphite used in pencils is innocuous, he says. But carbon nanotubes show alarming similarities to asbestos.

Indiscriminate use of nanosilver is detrimental to children’s immune system, found Friends of the Earth, an international environmental non-profit. Nanosilver has anti-bacterial properties. But its unrestricted use weakens children’s ability to fight infections.

Nanoparticles accumulate in the environment and kill the beneficial bacteria. A study by Iowa State University in the US found that nanotitanium dioxide particles interfere with the genetic functioning of zebrafish embryos.

Safety around the world

While the world lags in concrete nanotech-specific regulations, Australia has shown the way. In May this year, teachers in the state of Victoria urged schools to ban sunscreens that contain nanoparticles.

In August this year, the Danish Enviromental Protection Agency (EPA) released risk profiles of nanoparticles used in many consumer products. 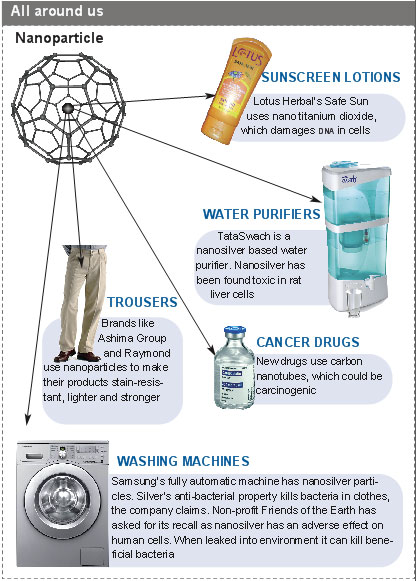 To understand the impact of nanoparticles on human health, the US Food and Drug Administrator (FDA) established a nanotechnology taskforce in 2006. In January this year, it issued draft guidelines on safe use of nanoparticles in consumer products. The US EPA, through its Toxic Substances Control Act, keeps a tab on the manufacturing of nano-based products in the country.

European Commission’s REACH, a regulatory framework for chemicals, has not suggested a policy that covers nanomaterials, but it does call them substances that need to be tested. Nidhi Srivastava at The Energy and Resources Institute in Delhi says, “There’s concern that the procedures REACH has outlined for testing may not be sufficient.” The European Commission has not come up with a policy for nanomaterial safety, but it has definitely been instrumental in initiating a debate on the issue, she says.

Regulation is essential, but is also difficult. “Nanoparticles behave differently in different products,” says Srivastava. Nanosilver, for instance, behaves differently in a washing machine than in paint. Regulatory bodies, therefore, have to develop a framework that encompasses this aspect of nanomaterial. DoST should now facilitate a dialogue among the concerned departments to formulate a sound policy, she adds.