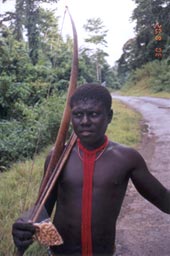 the Union ministry of tribal affairs has made a controversial move towards formulating a policy on the Jarawas -- the endangered tribe that inhabits the Andaman and Nicobar (a&n) Islands. Not only has the step been flayed because it indirectly promotes increased interference in the tribe's affairs, it is also said to have been taken in an insular manner. On both counts, it contravenes court orders.

The row relates to a seminar on the Jarawas, which was organised by the ministry and the union territory's (ut) administration in Kolkata on April 7-8. Experts allege that this in-camera meet went against the grain of the Calcutta High Court's (hc) directive, calling for open and detailed discussions on the tribe's condition. "Some draft policy recommendations were also formulated at the seminar," reveals Pankaj Sekhsaria of non-governmental organisation (ngo) Kalpavriksh. However, the Election Commission has imposed a restriction on making these public, lest they be used for electoral gains in the ongoing general elections, he adds.

The draft states that the official policy of bringing the Jarawas to the "mainstream" should be discouraged in principle. At the same time, it opposes the Supreme Court order on closing down parts of the Andaman Trunk Road that run through or along the forests of the Jarawa reserve, disclose sources who participated in the meet. They further assert that the seminar decided against curbing the authorities' involvement in the Jarawa habitations to enable officials to maintain their hold on the area. This, when the apex court and most anthropologists have suggested the opposite. However, it was conceded at the meet that the Andaman Adim Janjati Vikas Samiti -- the official tribal welfare agency of the ut -- had failed to take welfare measures for the Jarawas.

Although the ministry insists that the seminar was held in accordance with the hc order, many critics disagree. In 1999, the hc commissioned an expert committee to study the Jarawas and make recommendations on how to protect them. It also ordered the Andamans' administration to organise seminars of "national and international" experts as well as ngos having knowledge and experience in the matter. Instead, most invitees to this meet were current or former government employees and members of the committee whose report was to be discussed, points out Miriam Ross of Survival International, uk, which works for protecting the rights of tribal people. Incidentally, Ross was not allowed to attend the seminar on the ground that she is a foreigner. Samir Acharya, secretary, Society for Andaman & Nicobar Ecology (sane), agrees with Ross. Besides, experts like Sekhsaria and Madhusree Mukerjee allege that they had to undergo a lot of trouble to be included in the talks. Mukerjee is a New York-based author of a recent book on the Andamans' aboriginals.

Mukerjee told Down To Earth that although the outcome of the meet was indecisive, a progressive and effective policy can be framed in the end. "We have put our foot in the door and can't be pushed out of the discussions again." The seminar is proposed to be held again at Port Blair in May.