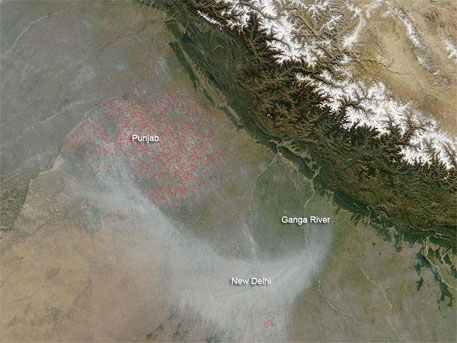 The practice of burning post harvest plant stubble in the agricultural fields of Punjab has received international attention with the National Aeronautics and Space Administration (NASA) releasing a satellite image that resembles those taken during forest fires. The Aqua satellite images captured by NASA shows large number of fires over millions of hectares of agriculture fields of Punjab.

“The fires could very well be agricultural fires. Smoke from hundreds of fires (the red dots seen in the image) obscure most of the Punjab region of India,” said NASA while releasing the image on October 31.

Punjab, the grain bowl of India, grows wheat and rice and produces around two-third of India's food. “Wheat and rice are the dominant crops—40 per cent and 60 per cent respectively of the country´s total production. Punjab also produces corn, fruit, cotton, sugarcane, and other cereals,” adds NASA.

An agricultural officer from Punjab said the state government has banned stubble burning. Besides, district authorities are invoking Section 144 of CrPC (imposed for preventing disturbance and maintaining law and order) to register cases against farmers who burn stubble on their fields. There are reports of FIRs being registered in districts like Sangrur. The agricultural officer added that Panjab Agricultural University (PAU) and the state agricultural department have been regularly issuing guidelines and alerting farmers against stubble burning, but to no avail. “Punjab farmers have habit of burning remains from paddy and wheat as it's an easy means of getting rid of the crop waste,” he added.

These fires could well be compounding the smoggy conditions prevailing over the national capital in recent days. R K Jenamani, director in-charge at the Met department office at IGI Airport, said no scientific assessment is being made to ascertain the contribution of these fires to Delhi's smog. “However, the wind direction is towards the city; so a quarter of total smoke in the air at present can be attributed to this factor. Delhi and NCR's own emissions are also substantial,” said Jenamani.

Without commenting on the harmful effects of stubble burning on soil fertility and the environment, a professor from PAU said “stubble burning is a big problem as it not only kills microbes in the soil but also causes air pollution.”  “PAU is strongly against burning of paddy straw and we have been working on alternative methods and technologies for the past several years, but the efforts are not paying off. More than 80 per cent farmers in Punjab still burn paddy straw despite all our efforts to sensitise them about the ill-effects of this practice,” he added.

He said that "At present, the only practical alternative to burning of paddy straw is the biomass plants installed by the Punjab Energy Development Authority (PEDA) four to five years ago. In these plants, the paddy straw is burnt as fuel to produce electricity. But the major problem here is disposal of ash. Besides, the quantity of paddy straw that can be used in this process is very low. Paddy straw only makes up 20 per cent of the raw material used in the process. The rest of it comes from waste material of other crops like cotton."

Causes of emissions from agricultural residue burning in North-West India: evaluation of a technology policy response