NASA tests Orion—the spacecraft that might carry people to Mars 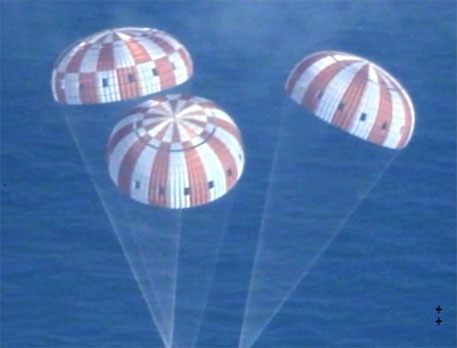 In what is another feat for NASA, the international space agency has launched its Orion spacecraft on Friday, a day after gusty wind and sticky valves forced NASA to delay the critical test flight. The spaceship that was launched from Cape Canaveral, Florida, aims to send man to Mars someday.

Orion orbited the Earth twice on the inaugural flight and the entire mission lasted for just 4.5 hours, culminating with a splashdown in the Pacific, to be collected by the US Navy.

11 parachutes are involved in today's #Orion flight test. Watch and see what they'll do: http://t.co/Rm3leqJ8xP

"The first Orion-SLS combo will fly around 2018, again without a crew. Astronauts are expected to climb aboard in 2021," says an AP report.

NASA has been developing Orion since 2004 to carry astronauts to an asteroid, the moon, and even Mars. The spacecraft is believed to be NASA's best hope for putting people back in space after the retirement of the Space Shuttle program in 1972 when it stopped sending crews into deep space.

Orion most closely resembles the Apollo spacecraft used for missions to the moon in the 1960s and 1970s has some updgrades. It is not only 50 per cent larger by volume but contains much more sophisticated computer systems. According to reports, NASA has spent more than US $9 billion in developing Orion, which will make a second test flight without crew in about four years.