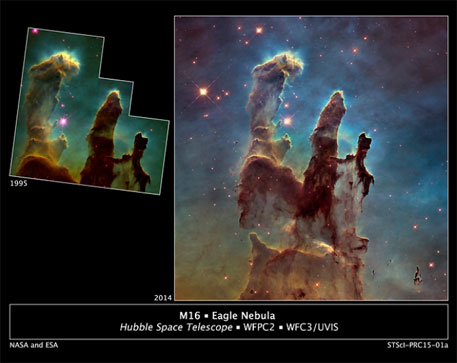 The National Aeronautics and Space Administration (NASA) has released a new, sharper image of the “Pillars of Creation” taken by the Hubble Space Telescope in 1995. The photo has been released ahead of Hubble’s 25th anniversary in April. The Hubble Space Telescope is a project of international cooperation between NASA and the European Space Agency. It is managed by NASA’s Goddard Space Flight Center in Maryland, US.

The “Pillars of Creation” are three columns of interstellar gas and dust in the Eagle nebula, also called M16, located more than 6,000 light years away from Earth. The magnificent nebulous structure was originally called “Pillars of Creation” as new stars are born inside them. NASA astronauts Jeff Hester and Paul Scowen are credited with taking the iconic photograph on April 1, 1995.

This time, the pillars have been photographed in near-infrared light as well as visible light. Seen in clear precision, the pillars appear as wispy silhouettes against a bluish background of millions of stars. “I’m impressed by how transitory these structures are. They are actively being ablated away before our very eyes. The ghostly bluish haze around the dense edges of the pillars is material getting heated up and evaporating away into space. We have caught these pillars at a very unique and short-lived moment in their evolution,” says Scowen in a report published by NASA. He explains that “the gaseous pillars are actually getting ionised, a process by which electrons are stripped off of atoms, and heated up by radiation from the massive stars. And then they are being eroded by the stars’ strong winds and barrage of charged particles, which are literally sandblasting away the tops of these pillars”.

When Hester and Scowen observed the Eagle nebula for the first time, they were amazed at what they saw. “I called Jeff Hester on his phone and said, ‘You need to get here now,’” Scowen recalls. “We laid the pictures out on the table, and we were just gushing because of all the incredible detail that we were seeing for the very first time,” he adds.

By comparing the 1995 and 2014 pictures, astronomers also noticed a lengthening of a narrow jet-like feature that may have been ejected from a newly forming star. Over the intervening 19 years, this jet has stretched farther into space, across an additional 60 billion miles, at an estimated speed of about 450,000 miles per hour, NASA claims.