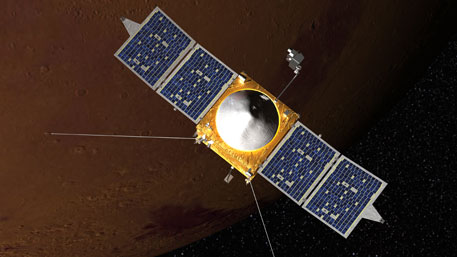 NASA’s MAVEN spacecraft successfully entered Mars’ orbit on September 21. At 9.37 pm EDT (7.07 am India time), the engine was fired to put MAVEN into the orbit of the Red Planet and by 10.24 pm, the news of its success reached Earth. A signal from the spacecraft takes 12.5 minutes to reach Earth.

Following orbit insertion, MAVEN or the Martian Atmosphere and Volatile Evolution will begin a six-week commissioning phase that includes maneuvering into its final orbit and testing the instruments. MAVEN then will begin its one Earth-year mission, taking measurements of the composition, structure and escape of gases in Mars’ upper atmosphere and its interaction with the sun and solar wind.

“As the first orbiter dedicated to studying Mars’ upper atmosphere, MAVEN will greatly improve our understanding of the history of the Martian atmosphere, how the climate has changed over time, and how that has influenced the evolution of the surface and the potential habitability of the planet,” said NASA administrator Charles Bolden. “It also will better inform a future mission to send humans to the Red Planet in the 2030s.”

It is believed that Mars was covered with a layer of air which kept it warm and wet. But gradually the atmosphere lost the protective layer of air and is now dry and cold. It is hoped that the existing atmosphere would give a clue about what happened.

MAVEN was launched aboard an Atlas V launch vehicle on November 18, 2013—13 days after India launched its Mars orbiter. The spacecraft travelled a total of 442 million miles in the past 10 months to reach the Mars orbit. Maven managed to reach earlier as it was shot off into the space directly unlike India’s orbiter which circled around the Earth for 25 days to gain appropriate velocity. The Indian spacecraft is expected to be injected into the planet’s orbit on September 24. ISRO’s orbiter, too, would be studying the planet’s atmosphere.