Natural disasters: why are we always so unprepared? 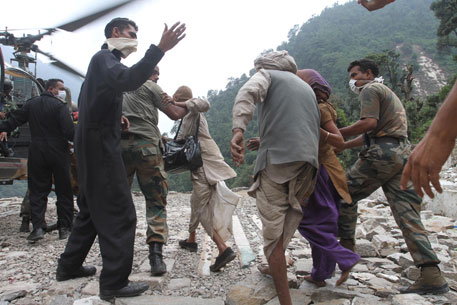 Natural disasters strike without notice. With changing climate, fear of extreme rain, tropical cyclones and variable weather events will now intensify—all these will make our world even more vulnerable and more hazardous. The question is why civilian India remains so unprepared to deal with disasters—to forewarn people; to handle the crisis and to rehabilitate the affected.

Every time we have a natural disaster, exacerbated by human mismanagement of the environment, we are caught on the wrong foot. Worse, government agencies make every possible excuse to shift blame. In all this, we lose precious human lives. Take the case of Uttarakhand floods.

We know that Himalaya, the world’s youngest mountain range, is lashed by heavy rains and prone to landslides and flash floods. In addition, it is located in a highly seismic zone, which makes the ecologically sensitive region very vulnerable. We know this; and each year, this region witnesses disasters—landslides to earthquakes—of increasing ferocity and certainty. Therefore, clearly, this is a disaster hot spot, which needed attention and focus.

But none came its way. Disaster management demands, firstly, scientific knowledge to understand and map our vulnerability. It is easy for the agencies like the National Disaster Management Authority (NDMA)—set up post 2004 tsunami—to glibly talk about a new early warning system. But the fact is that we do little to plan and prepare ahead. After all, predicting extreme rainfall events is possible. Even prediction of cloud burst is possible. Scientists now talk about ‘now-casting’ technologies, using Doppler radars and automatic stations to predict in real time, events to happen. Why Uttarakhand never got the promised radars is a question everybody is evading.

Secondly, understand that instrumentation — however important, however sophisticated — will not save lives. Science can merely help us predict natural disasters, only warn us about our vulnerability. In this case, the regional meteorological office had forecast extreme heavy rain—up to 200 mm. This is clearly enough of a dire warning and the disaster management establishment should have swung into action, issued weather warning; evacuated pilgrims from the most populated sites and stopped others from proceeding to the hills. But nothing of the kind happened.

Instead, after the disaster, NDMA vice chairperson has been quick to pass on the blame to the Met office, saying they did not inform them of the quantum of rain; when told that they did; he goes on to say that the exact location was not told. Ridiculous and unacceptable.

Thirdly, floods do not kill. Buildings and bad planning does. Therefore, once we understand the vulnerability of seismic, landslide and flood-prone areas, we have to use this knowledge to ensure that structures that come up are not in the vicinity of waterways and are earthquake resistant. But this is precisely where we completely fail. We do not need new science to teach us this. But what we need is to ensure government agencies strictly regulate building plans. In this case, construction has happened everywhere—Kedarnath satellite images show clearly how the settlement to house thousands of pilgrims came up in the direct path of the streams emanating from the mighty Himalaya. This should not have been allowed.

Safety is always an afterthought for us. Until the next disaster strikes, and then agencies like NDMA temporarily shift gears to talk about the need for better preparedness and coordination. This is our real tragedy.