This is a fresh earthquake and not an aftershock, says expert 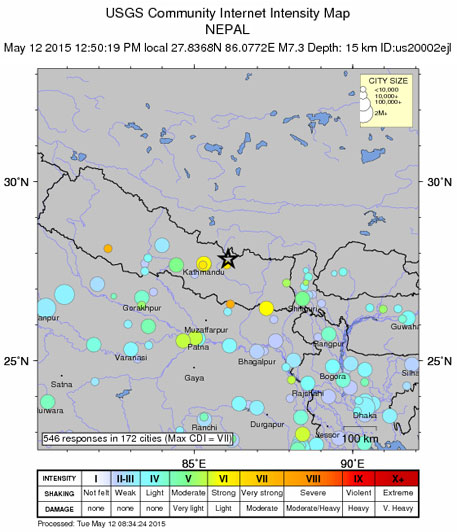 At least 66 people have been killed and more than 1,100 have been injured in Nepal. Many buildings have collapsed in a town called Chautara in Tuesday's quake, an official with the International Organization for Migration was quoted by the Associated Press as saying. Authorities say Dolakha, Sindhupalchowk, Kathmandu and Lalitpur were most affected.

According to the Indian home ministry, the quake claimed 16 lives in Bihar and one in Uttar Pradesh. Thirty-nine people were also injured.

Today’s earthquake occurred at a depth of between 15 and 18 km, according to the US Geological Survey. The epicentre is 76 km east-northeast of capital city Kathmandu. Media reports say people rushed out of buildings in Kathmandu when the tremors started.

Tremors were also felt in many places in northern Indian states as well as in parts of Afghanistan, Pakistan and Southeast Asia.

The US Geological Survey calls today's quake "the largest aftershock to date of the M 7.8 April 25, 2015 Nepal earthquake". But Indian experts disagree.

“As it is of 7.3 magnitude as per the US Geological Survey, it cannot be termed as an aftershock,” says Supriyo Mitra, associate professor at Department of Earth Sciences, Indian Institute of Science Education and Research (IISER) Kolkata. “This is a fresh earthquake, but is associated with the earthquake in Nepal in other ways,” he said.

Mitra explains that aftershocks are generally at least one magnitude weaker than the main earthquake. Since the M 7.3 earthquake on Tuesday, at least seven tremors between 4.5 and 6.2 magnitude were recorded in the region around Kodari, according to the European-Mediterranean Seismological Centre.