1,300 drought-prone Maharashtra villages build watershed structures on their own to harvest every drop of rain this monsoon 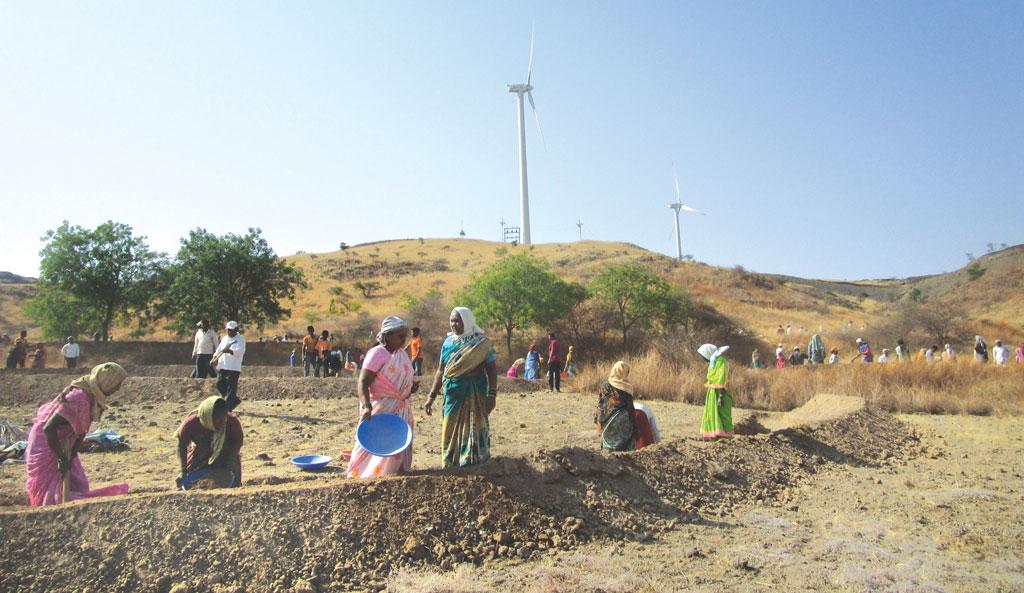 Every day at six in the morning, more than 400 residents of Maharashtra’s Kiraksal village head for the surrounding hills, packed in tractor trolleys. As soon as they reach near the hilltop, they begin digging the hard soil. “We only have a month left to finish the watershed works so that we can drought-proof our village. This monsoon, not a single drop of rain that falls on our village should go waste,” says Amol Katkar, the 28-year-old sarpanch of Kiraksal that falls in the drought-prone Maan taluka in Satara district.

“During monsoon, several nullahs flow down the hills around our village. So we decided to voluntarily spend three hours every day (shramdan) to construct water harvesting structures that will hold rainwater, replenish the groundwater and stop soil erosion. This will increase soil moisture, raise water table in our wells and help us tide over peak summer months,” says Amol, who was elected last year.

The interesting aspect of this voluntary initiative is that it is conceptualised, planned and executed by the people, without any help from the government. In January this year, the gram sabha (village council) passed a resolution to adopt watershed management practices in Kiraksal. In March, Amol, along with four other residents, including two women, attended a four-day training programme on watershed management organised by non-profits Paani Foundation, Watershed Organisation Trust, and Sparsh-Centre for Participatory Learning.

“We learnt to read contour maps, and different types of structures to harvest rainwater and how much water those structures can hold. For instance, on heavy slopes, deep CCT (continuous contour trench) has to be dug to break the speed of water and also arrest soil erosion. On nullahs, a series of loose boulder structures are beneficial,” says Pankaj Katkar, who attended the training programme.

The five then trained 88 Kiraksal residents and drew up a watershed management plan, with the support of the non-profits. “We have formed 25 groups of 10-15 residents each and divided the watershed works among ourselves,” says Savita Jadhav, leader of one of these groups. Three more groups have been formed by trained youngsters to check the structures and measure them every evening. “Poor work can wash away the structures in just one rainfall,” says Jadhav.

In monetary terms, the shramdan translates into work worth Rs 25-30 lakh, and should save water worth Rs 90 lakh in a year (a 10,000 litres water tanker costs the government Rs 2,000), says Amol. “We are confident that next year onwards we won’t have to request the tehsildar for water tankers in the summer months,” says Kiraksal resident Uddhav Katkar.

Kiraksal is not the only village in the state to have adopted rainwater harvesting and watershed development. This year, more than 1,300 villages in 13 districts in Maharashtra have undertaken watershed management works to drought-proof their villages. In February and March, residents from over 5,000 villages across the state participated in the four-day training that Amol attended. “We all want to become paanidar (water sufficient) villages,” says Amol. Residents of the villages say they are drawing inspiration from the 116 villages that last year created decentralised water storage capacity of 13.68 billion litres, which is equal to 1.4 million tankers of water, and can store water worth Rs 272 crore.

Velu village in Koregaon taluka of Satara, about 50 km from Kiraksal, is one of the villages that experimented with the shramdan model last year. Till last summer, the 341 families in the village were facing acute water crisis. All wells in the village would normally run dry by January every year and the village would survive the summers on water tankers. So the residents constructed water harvesting structures between April and May 2016, and this helped them save 2.82 billion litres of water last year. “This is the first summer when we have not called for a water tanker,” says Velu resident Navnath Bhosle.

The people’s movement offers hope to many villages in the state that have been reeling from severe droughts in the past few years. This has crippled the farm sector and rural economy. As per the National Crime Records Bureau, Maharashtra tops the country in farmer suicides. In 2015, more than 3,000 farmers in the state committed suicide, which is 37.8 per cent of the total farmer suicides in India that year.

Even the Jalyukt Shivar Abhiyaan, the state government’s lone scheme that plans to drought-proof all villages by 2019, is moving at a slow pace. For instance, against a total of 186,107 planned works, only 39 per cent were completed by March 25 this year. The scheme, launched in 2014, is plagued with other problems as well. Works undertaken at villages do not follow the ridge-to-valley approach, and are ad-hoc and unscientific, says H M Desarda, economist and former member of the Maharashtra State Planning Board. The government programme focuses on chasing annual targets and favours the contractors. “There is no or little capacity building. Village residents are not trained in watershed management, hence they fail to question poor works carried out by the contractors,” says Aaba Lad, a farmer in Koregaon taluka, Satara.

Himmat Rao Kharade, deputy collector of Satara, says there are limitations on funding and the number of villages to be covered in one year. “In 2016-17, we selected 25 villages of Koregaon taluka under Jalyukt Shivar Abhiyaan. This financial year, we have chosen 30. At this rate, it would take over five to six years to cover one taluka,” says Kharade. People’s movement can transform rural landscape at a faster pace, he adds.