About 7,000 farmers need help to restore their capacity to produce food, FAO states 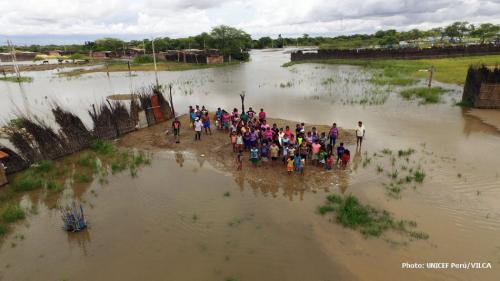 Small-scale farmers in Peru need urgent assistance to cultivate crops and feed their families in the wake of heavy rains, floods and landslides that hit the Latin American country earlier this year.

The severe flooding was caused by “Coastal El Niño”, which hit the country during January-March. According to the Food and Agriculture Organization (FAO), in the worst-hit northern coastal areas of Peru, about 445,000 people are affected. About 7,000 farmers need help to restore their capacity to produce food.

According to Peru’s Ministry of Agriculture and Irrigation, more than 60,000 hectares of crops have been severely or partially affected and 18,000 hectares have turned unusable, FAO press release states.

The international food agency’s State of Food and Agriculture 2016 report talks about an “urgent need to support smallholders in adapting to climate change”. Farmers, pastoralists and fishermen are vulnerable to floods and droughts triggered by climate change. About 475 million low-income, small-holder farmers’ access to technologies, markets and credit is limited. They need access to technologies, markets, information and credit for investment to adjust production systems and practices to climate change, the report adds.

To help farmers recover, the Peruvian government has approved the Agrarian Reactivation Plan at an investment of $ 76 million. The recovery project will help establish orchards, recover irrigation infrastructure and provide technical assistance in animal health.

Climate-induced disasters badly impact the food security and agriculture situation in Latin America and the Caribbean. The region is vulnerable in view of its economic dependence on agriculture, low adaptive capacity of the people and the geographical location of some of its countries.

“Climate change-related disasters will produce the greatest economic impacts in the region,” Jorge Meza, senior forestry officer at FAO’s regional office for Latin America and the Caribbean, told Down To Earth in an interview earlier.

In the past 10 years, natural disasters have been occurring with increasing frequency in Latin America and the Caribbean region. Flooding is the most common disaster, a report states.

Climate change-related disasters produce the greater economic impacts in the region (70 per cent of all emergencies are related to climate). To cope with the situation, countries in the region are not only promoting climate-smart agriculture, but also sustainable agriculture which allows them to treat social, economic and environmental/climate aspects simultaneously.