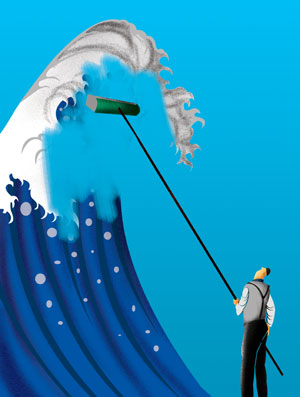 The contrast is striking. Over 90 per cent of Rotterdam in the Netherlands sits below sea level whereas 100 per cent of Chennai, Mumbai and Kolkata sit either above or at sea level. Yet, Rotterdam is considered safer than Chennai, Mumbai or Kolkata. Why? Because bands of smart dykes and computer-controlled massive floating arms, constructed by the visionary and gritty Dutch, bind Rotterdam’s shorelines, keeping away the storm surges from invading the port city. On the other hand, Chennai’s, Mumbai’s or Bengaluru’s stormwater and drainage infrastructure crumbles every time there are incessant rains, drowning major parts of the cities. Though extreme events strike western countries too, they rarely transform into large-scale disasters. Images of the recent floods that submerged Chennai have not faded out of public memory.

Twenty five years ago, the Intergovernmental Panel on Climate Change (IPCC) made its first scientific climate change assessment and confirmed global rise in mean temperatures and sea-levels. It predicted that rise in global mean temperatures and associated shifts would lead to extreme hydrological events in the 21st century. Since the first IPCC report, many international agencies have come up with various scientific studies on climate change so that governments mitigate the impacts of extreme events. While the Dutch, Germans, French and Americans have taken this science seriously and taken action to protect their citizens, Indians either view these studies as science fiction or have just confined the science of climate change to reports, advertisements, seminars and symposiums.

The country has failed to focus on the mitigation and adaptive measures to various extreme weather events. As a result, coastal cities like Chennai, Mumbai and Kochi continue to march closer towards the shorelines, when they should have, instead, moved away from the sea. Similarly, cities like Kanpur, Allahabad and Varanasi are encroaching upon vital floodplains, making residents vulnerable to extreme events.

But consider the paradoxes. Till recently, Chennai was synonymous with water scarcity. Yet the city is hailed as the pioneer in rainwater harvesting with a remarkable 90 per cent coverage. The record rainfall during November/December last year exposed the gaping holes in Chennai’s water management—clogged drains and dysfunctional rainwater harvesting structures. Decades ago, Cherrapunji in Meghalaya used to be the largest recipient of rainfall in the world. Today, it is facing a severe water scarcity. These paradoxes expose Indians’ penchant for serial thinking, even as retrospective debates regarding adaptation to extreme events rage across the media. The blame game is ubiquitous, but all in hindsight.

Worse, this regressive blame game continues unabashedly despite recurring warning signals about extreme events, like the 2011 floods in Odisha, floods in the Northeast in 2012, the Uttarakhand flood fury in 2013 and devastating floods of Jammu & Kashmir in 2014. Academic institutions such as the Indian Institute of Technology and National Institute of Technology have become elitist, focusing merely on academic excellence in water management—again a serial thinking mindset. This approach is contrary to the parallel thinking of many world class institutions—like the National University of Singapore, TU Delft and UNESCO-IHE in the Netherlands and the University of California in the US—that have collaborated their innovations with governing bodies so that their work benefits the common person on the ground.

El Niño driven events have given rise to new extremes. Gradually, more people are now waking up to the new reality of this “unknown extreme”—the reality that water scarcity isn’t the only dimension of water management, as was illustrated in the case of the Chennai floods. And on the contrary, water abundance is no longer the only dimension in Cherrapunji. So, there is an urgent need to shift towards a parallel thinking to better understand the “unknown extremes”.

Coastal cities should halt development towards shorelines before sea levels rise further causing devastation to life and property. Development strategies should be diversified so that the focus shifts from major metros to smaller towns and cities. Authorities must prepare for any eventuality by keeping reservoirs desilted; by decongesting drains and pipe outlets; and by reviving rainwater harvesting structures.

But cities remain vulnerable as authorities are stuck in a serial mindset. Groundwater has already been overexploited and can no longer guarantee water during a drought. Therefore, water conservation, including recycling and reuse of water, improving the efficiency of water management agencies, and, improving water governance and delivering efficient water services should be given a priority.

More importantly, India needs to shift focus towards the “unknown extremes” through higher investments in R&D in the water sector. It must increase engagement between government agencies and academic institutions. There must be development of technology and innovation on a par with the western world. Now with the flood season behind, a severe season of water scarcity is staring at us. The faster the administration learns lessons from the impacts of unknown extreme events like the Chennai floods or the Cherrapunji water scarcity and takes lateral decisions, the better it will be for common people and their quality of life.

The author is Director, Central Water Commission. The views expressed in this article are personal.