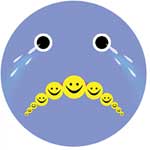 These days workers of the Janata Dal (U) are busy leafing through newspapers of the last five years. No, they aren't into heavy political research. Workers of Bihar's ruling party are busy searching for the allegedly comical statements made by Union Railway Minister Lalu Prasad Yadav on flood victims. They also want to highlight political mockery during Kosi floods that wreaked havoc in five districts displacing around three million people.

President of the Bihar unit of Janata Dal (U), Rajiv Ranjan Singh, claimed that comics is an attempt to end the "political insensitiveness" over calamities. According to the Janata Dal (U) in 2004 Lalu said that flood brings fish and is generally a merrymaking time for villagers. In the same year, he is alleged to have said that the country was facing a dry spell but Bihar had abundance of water because of floods.

There are also plans to have a section on Kosi floods in which the Ministry of Railway Express kept crisscrossing through the flood hit area. "The train could have carried relief materials but Lalu chose to use it to instigate the flood victims against chief minister Nitish Kumar," Singh said.