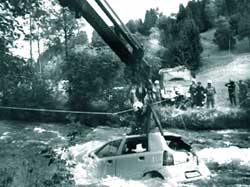 torrential rains and swollen rivers have caused chaos across central and eastern Europe, while a massive heat wave in southern Europe has helped reduce the Portuguese woodland to tinder. Tens of thousands of people face a massive relief operation as the extent of the devastation slowly becomes clear. The death toll continues to mount steadily across the continent. The latest estimate puts the number since mid-August 2005 at over 150. "Unfortunately, we are expecting the number of victims to rise by the hour," said Romanian interior minister Vasile Blaga on August 25, 2005.

Though the heat wave persists in Portugal and Spain, forest fires in Portugal have been brought under control (see box: Drought in Portugal, Spain). By August 26, 2005, the waters began to recede across Germany and the Czech Republic, the countries hardest hit by the floods. The situation also improved in Croatia, Austria, Bulgaria, Poland, Hungary and Slovenia. But some areas of Switzerland and Germany remained on alert.

Thousands of people were evacuated from their homes across Europe. Dozens of villages were abandoned in Portugal, while helicopters were used in Switzerland and Austria to airlift people from flooded houses and landslides. The floods' worst impact was along the Danube, Morava and Elbe rivers and their tributaries. Dresden in Germany was one of the hardest hit.

Germany puts the damages at around us $14 billion, but the German state of Saxony alone puts its own costs at around us $16 billion. Austria quotes a cleanup bill of us $2 billion, and the Czech Republic us $3 billion. But all these figures are speculative. What is disturbing is that relief operations appear stretched. In Germany, only us $200 per adult is currently available from both the eu and the government.

The reason behind the bedlam is the jet stream, high-speed winds usually found just below the tropopause, which drives the depressions and fronts that affect the weather. Usually found between 7,620 metres (m) and 13,716 m altitude, it flows eastwards at speeds up to 200 m per hour around the Earth. It is formed when cold air from the Arctic meets warm air from the tropics. Because the jet stream fluctuates, its track makes huge differences to the weather. In an average year, it flows from west to east across Europe, weakening and strengthening and oscillating between sub-tropical and sub-polar latitudes. But this year, its track has been unusually persistent in its positioning around Europe. Since November 2004, it has been fixed into a west north west to east south east sweep, locking high pressure over southwest Europe, creating the intense drought, and driving Atlantic depressions deep into eastern Europe with deluges of rain.

While many blame global warming for the disaster, some scientists are reluctant to draw a direct link. "We are linking these events to climate change...There are also other things happening: building up of the land, bad land use plans, bad fire prevention in the south...But all the factors together are more and more exacerbated by global warming," explains Martin Hiller, spokesperson for Worldwide Fund for Nature. Malcolm Haylock of the University of East Anglia, the uk, is more dithering: "You can say that due to the Earth getting warmer, there will be on an average more extreme events, but you can't attribute any specific event to climate change."

Despite growing consensus about global warming, it is hard to find long-term trends in rainfall that would have directly influenced the droughts and floods. Some experts believe the North Atlantic Oscillation climate system has caused a drift towards drier conditions in southern Europe and more rainfall in the north during winters; its effects during summers are not as clear.