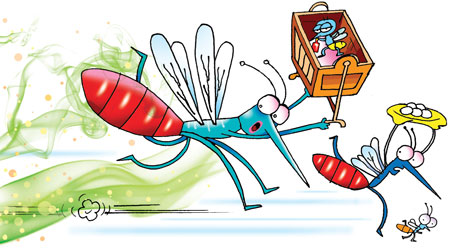 BIOLOGISTS have just woken up to the presence of chemicals that can dictate the egg-laying preferences of a mosquito. A whiff of the chemical can make a gravid insect avoid a water pool.

Is this the malaria solution the world is waiting for? A team of ecologists at University of Haifa in Israel led by Alon Silberbush documented that a predatory chemical signature, kairomones, might help curb malaria by targeting breeding sites. Excreted by predatory insects, kairomones warn the prey of the predator’s presence.

Kairomones have always been around; even when they seem to benefit the prey and not the predator, evolution has not knocked them off the system. Yet, few scientists have studied their chemical nature. The researchers observed an aquatic insect, backswimmer (Notonecta maculata), that feeds on larvae of a mosquito, Culiseta longiareolata. When the gravid mosquito approaches the water containing the predator, it senses the highly volatile kairomones from the surface and turns away, ensuring the safety of its progeny and itself. The researchers analysed kairomones excreted by the backswimmer and identified that two kairomones—hydrocarbons nheneicosane and n-tricosane—strongly repelled mosquitoes.

They then examined the role of these chemicals in five artificial pools between April and June in 2007 and 2008. They added plain tap water in one pool, filled two with each kairomone separately and the fourth with a mixture of the two kairomones. In the fifth pool they kept the predator for some time and took it out to prepare backswimmer- conditioned water. The pools were filled before dusk when mosquitoes begin laying eggs.

On the first night, the pool with backswimmer-conditioned water and that with kairomones mixture repelled mosquitoes the most. The egg rafts found in these pools were 88 and 65 per cent less than that in the plain water pool. On the second night, only the backswimmer-conditioned water repelled mosquitoes, whereas the pool with kairomones mixture did not. This indicated there were unidentified potential repellents in the backswimmer- conditioned pool, which stayed on even after the two kairomones evaporated, the researchers reported in Ecology Letters on July 2.

So when does the malaria vector take the fall? Leon Blaustein, co-author of the paper, answered: “We know that Anopheles gambiae also detects backswimmers and avoids them. Whether it responds to the same chemicals as C longiareolata, remains to be tested. The bottom line is use of kairomones against malaria is relevant.”

Krijn Paajimans, researcher at the Centre for Infectious Disease Dynamics in Penn State University in the US, said these kairomones could very well reduce the size of the next mosquito generation by reducing number of eggs. Besides, spending time to find a suitable habitat costs energy and increases mortality rates. But here is the problem, added Paajimans, “The Anopheles species does not lay all its eggs in single raft like the Culiseta species, but deposits individual eggs at several breeding sites to increase chances of survival.”