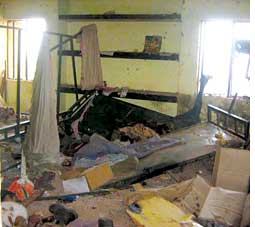 CISF men left to battle armed rebels on their own

About 200 naxals including women ambushed the cisf personnel on Panchpatmali hills around 9.30 pm. They took 100 nalco employees hostage and confined them in the canteen till dawn when they decamped with their loot. None of the hostages was harmed. The naxals also blew up the mobile phone tower on the hill to prevent information of the attack. The jawans had to battle the guerrillas on their own as reinforcements did not arrive until next morning. They shot down three of the attackers.

The Koraput district police came to know about the incident almost immediately through informants in Damanjodi but did not send reinforcement at night fearing maoists may have planted landmines in the hilly terrain, sources said. By the time the Central Reserve Police Force and state Special Operations Group personnel reached the site in the morning, the maoists had retreated. One naxal was killed and three arrested in combing operations by the joint police force.

This is the first instance of maoists targeting a public sector undertaking. Koraput superintendent of police, Deepak Kumar, said the main target of the maoists was the cisf armoury. The state police had advised nalco to shift the facility as it was vulnerable and cisf personnel easy target for snipers, but the warning was not heeded. The police said local people may have helped the naxals.

Sudhakar Patnaik, journalist based in Koraput, said tribals comprised 51 per cent of the population; they support the maoists as they are disillusioned with the state administration. Over 70 per cent people in Koraput live below the poverty line. "Fear and illiteracy is also driving the people towards the naxals," Patnaik said.

Kumar admitted the area lacks proper roads and hospitals which is helping the rebels. He said men in khaki are the only visible symbols of governance in the area and get treated as enemies by naxals as well as the people living there.