The National Environment Appellate Authority (NEAA) in Delhi has cancelled the environmental clearance to the coal-fired power plant that was to be built near Sompeta in northern Andhra Pradesh.

The verdict follows close on the heels of a two-day bandh declared by people of Sompeta, Kanchili and Kaviti blocks in Srikakulam district to protest the police opening fire on a 10,000 strong crowd on July 14. Two persons were killed and several others, including policemen, were injured in the violence. 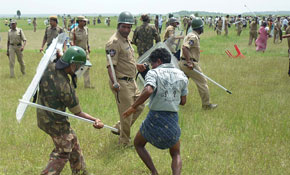 The crowd had gathered to watch Nagarjuna Construction Company (NCC) begin work on the power plant. People from 16 villages started gathering near a drain, Beelabeti, at the site between Baruva and Golligandi village from 9 a.m. The policemen, numbering over 2,000, lathi-charged the crowd. Another round of lathi-charge took place around 11 a m. A little before 1 p m, the police opened fire, killing two. Fifty-five year old Gonappa Krishnamurthy from Lakhavaram village, a daily wage labourer, was one of them.

“I was there when he (Krishnamurthy) got shot but we couldn't do anything. There were 300 to 400 goons hired by the company,” said Gonappa Rajula, sister-in-law of the victim. The beela is our life, our livelihood is at stake, she added.

The beela or water body is a 405 hectare (ha) wetland on which the 2,640 MW power plant was to be constructed.

Nineteen villages depend on the swamp for irrigation and fishing. But according to documents submitted by the consruction company to the Union environment ministry's expert appraisal committee (at the time of obtaining environmental clearance), the area shows no signs of a marshland, and there is no agriculture in the area. The site, according to studies sponsored by NCC, is barren and not near the sea. The studies include one by the National Institute of Oceanography in Goa and one by the University of Hyderabad. The land has been earmarked by the Andhra Pradesh Industrial Infrastructure Corporation for industrial development and hence was allotted for the power plant.

The ministry's expert appraisal committee had also sent a team to Sompeta. The team checked the area for water logging, agricultural dependence of people, distance from the sea and ecological sensitivity of the area. The committee report also said the site is dry agricultural land which sustains only rainfed paddy. It also said there are no houses and no trees in the area. “All these observations are wrong. I visited the site with the NEAA and it was obviously a swamp with fields and trees and houses nearby,” countered Ritwick Dutta, the lawyer representing the Paryavaran Parirakshan Sangam that had filed the appeal before NEAA.

Anti-NCC sentiments run high in the region. Slogans asking the company to go back are written in large letters on walls of houses in Zhinkibhadra and Benkili villages close to Sompeta town. People are also angry that the government sided with the company and said they were fired upon by the police without provocation. “People were chased from the site to the town two kilometre away even though they had begun to leave the project site,” said 26 year-old P Lakshminarayan who was shot in the thigh. Two tents destroyed by the protesters belie their claim. The tents belonged to the labourers hired by NCC. “Atleast 30 policemen were also injured,” said Ishaq Ahmed, the circle inspector at Sompeta. “All the company wanted was to do some groundwork,” he said.

This groundwork has been explained by the police and district administration as demarcation of the land and some cleaning. But none of them could explain what cleaning needs to be done in the wetland. Activists questioned the official version on the events leading up to police firing.

No consent to establish

On July 13, the collector of Srikakulam, N Srikant, and the superintendent of police, Sanjiv Kumar Jain had met some members of Paryavaran Parirakshan Sangam (the group protesting against the plant) to request that NCC's work not be disturbed. At the meeting, the Sangam president, Krishna Moorthy, told Srikant that NCC could not possibly start work as the mandatory consent to establish from the state pollution control board was still pending; so was the appeal before the NEAA.

The state pollution control board's environment engineer, K Ramesh, said NCC wants to take possession of the land including the 243 ha of private land that they bought. He also confirmed the consent to establish has not been granted; the paperwork is being processed, he said.

V S Krishna, general secretary of the Human Rights Forum of Andhra Pradesh, said the beela also called peddha beela is a low-lying swamp area serving as a wetland, providing invaluable ecological services to the region. Perhaps among the last surviving marshy stretches on the Andhra coast, it supports a variety of flora and fauna besides providing means of living to the families in the area.