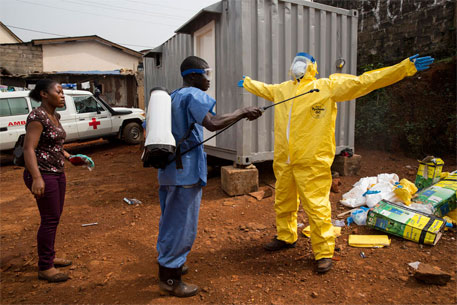 The number of residents of Guinea, Liberia, and Sierra Leone who experience food insecurity is expected to reach one million by March 2015, says a recently-released joint report by UN Food and Agriculture Organization (FAO) and World Food Program (WFP).

According to the report, border closures, quarantines, hunting bans and other restrictions are seriously hindering people's access to food, threatening their livelihoods, disrupting food markets and processing chains, and exacerbating shortages stemming from crop losses in areas with the highest Ebola infection rates.

"The outbreak has revealed the vulnerability of current food production systems and value chains in the worst Ebola-affected countries," said FAO Assistant Director-General and Regional Representative for Africa, Bukar Tijani. "FAO and partners need to act urgently to overcome the agriculture and market disruptions and their immediate impact on livelihoods which could result in a food security crisis. With timely support, we can prevent the outbreak from having a severe and long-lasting impact on rural communities," he added.

The present outbreak that hit four countries of Africa last year has already claimed nearly 8,500 lives and affected nearly 21,000. A recent report had claimed that the warned that the virus causing the disease has mutated.

The scientists at Institut Pasteur in France are now investigating if the Ebola virus could have become more contagious and are starting to analyse blood samples from Guinea.