Emissions of the shipping sector are extremely high 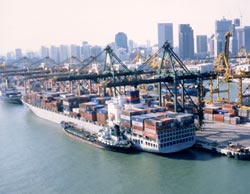 the quantity of pollutants belched into the atmosphere by shipping activities worldwide could be double than what was earlier estimated. This is the finding of an analysis conducted by James Corbett of the University of Delaware, usa, and Horst Khler of man b & w Diesel, a Germany-based supplier of shipping equipments. The researchers assert that the level of nitrogen oxides emitted each year by tankers, ships and trawlers is similar to that of the us. The oxides release a deadly cocktail of reactive gases, such as ozone, into the atmosphere.

If the findings are true, then climate models may need to be revised. For the past few decades, there has been considerable debate about the emissions of ships because they are difficult to calculate. Most estimates are deduced from fuel sales and the average performance of marine engines. Previous calculations of the emissions were based on the assumption that around 180 million tonnes of fuel is consumed by the international shipping sector every year. Corbett and Khler, however, propose that the 88,000-strong fleet of the sector consumes around 289 million tonnes of fuel per year.

Other experts agree that previous estimates are too low, but assert that Corbett and Khler's figure is too high. Researchers from the Norway-based shipping consultancy, Det Norske Veritas, revise the fuel consumption upwards by only 30 per cent. They reckon that Corbett and Khler overestimated the average engine's running speed. Their assertion may be right, as they used a satellite-based tracking system to arrive at their conclusion.

Due to the use of hi-tech gadgets, they were also able to estimate the sector's contribution to greenhouse gases such as carbon dioxide. The levels were found to be the same as those of the airline industry. At present, since both the industries operate trans-nationally, they are not under the ambit of the restrictions stipulated by the Kyoto Protocol. But if they really account for a significant amount of emissions, as the new analysis hints, then policymakers may need to rethink. "At least there should be a policy at the international level," asserts Corbett. Legislation is beginning to emerge -- in Los Angeles, for example, ships must now slow down as they near the port to reduce their emissions. Even the International Maritime Organisation is expected to formulate a emissions treaty.