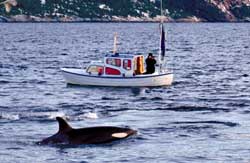 Norwegian scientists have found that killer whales, or orcas, have overtaken polar bears in toxic content -- but it's because of what others ingest. No other arctic mammal has taken in such high concentrations of hazardous human-made chemicals. The Norwegian Polar Institute tested samples from animals in Tysfjord in the Norwegian Arctic. The chemicals found include pesticides, flame-retardants and polychlorinated biphenyls -- used in many industries. The whale, being at the top of the food chain, is most affected. Researchers are more concerned about flame-retardants, which unlike other harmful chemicals, is still legal. The World Wide Fund for Nature has stressed the need for strong laws against chemicals but fears pressure from the industry could lead to proposed legislation being watered down.