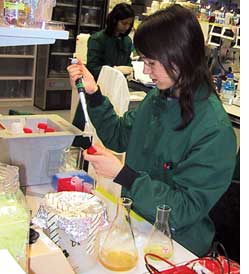 in january 2009, there was an outbreak of meningococcal meningitis in Meghalaya and Tripura. Two thousand people were infected, 250 died. Over the past years, this disease has afflicted the world several times and with varying intensities. Helena Lo and other researchers, at the department of microbiology from the Imperial College in London, UK, got together to investigate what makes the meningitis bacterium life-threatening.

The meningitis is caused by the bacterium Neisseria meningitidis. It has evolved such that it only requires the body of one host to complete its life cycle: the human body. Such adaptability also means it has acquired sufficient skills to evade the immune system. No vaccine has yet been able to counter this disease.

This Neisseria species has 1,900 different copies of a specific dna sequence within its genome. The sequence helps in the uptake of genetic material from other bacteria that cause gonorrhoea and sepsis. This changes the bacterium's genome. As the genome changes, so does the bacterium's surface proteins which it codes for. Hence the surface coat keeps changing and the human immune system has to keep producing new antibodies against the bacteria, said the study in the July issue of The Lancet.

Another mode of defence that this bacterium has entails mimicking the molecules produced by the human immune system. The human body produces two proteins with anti-bacterial properties--lactoferrin and transferrin--to tackle most disease-causing bacteria. These proteins contain iron which is an integral part of their structure. N meningitidis has lactoferrin and transferrin binding proteins on its surface. The bacterium binds to those proteins, takes the iron from them, and transports it inside its cell for its own functions.

Early stages of the disease can mimic viral infections like influenza. But this can rapidly progress to life-threatening septic shock within a few hours. Due to such non-specific symptoms and rapid progression, diagnosis is either delayed or missed in most people.

The existing vaccines target the carbohydrate molecules in the capsule of the bacterium. Menomune is one such vaccine made by Sanofi-Pasteur, a French pharma company. It has 85 to 90 per cent efficiency rate.

Two new vaccines, targeting the bacterium's surface proteins, are under clinical trials. One of them has been created by testing 300 proteins as potential vaccine candidates. Five of those proteins are part of the vaccine.

"Vaccine researchers in India are focusing on endemic strains. The Serum Institute of India in Pune is developing a vaccine," said Swaranjit Cameotra, microbial biochemist at the Institute of Microbial Technology, Chandigarh.