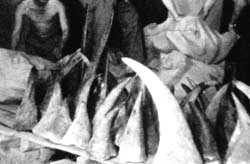 Officials in Nepal and India have expressed concern over the trans-boun-dary migration of wild animals. They say the movement of animals is posing a serious threat to the life and property of the people living in the adjoining villages.

Wild elephants around the Bardia National Park, bordering India in western Nepal, have forced the people to stop banana plantations. Not only are the people in panic because of the protected wildlife, the wild animals are also facing survival problems due to illegal hunting and logging in the region. Rajan Pokharel, district forest officer in Banke district, western Nepal, says, "We have problems in at least 19 districts from the Indian side whereas the Indian nature reserves face problems from seven Nepalese districts."

In January, officials from both the countries met in Kathmandu to discuss the trans-boundary movement of animals.They focused on issues pertaining to security of the migrating animals in border areas, establishment of joint anti-poaching units, identification of transit points of illegal trade of wildlife products, study of migratory animals and exchange of migratory wild animals.

According to environmentalists, the meeting on wildlife conservation gave importance to wildlife and not to the problems of the people. No law provides ground for compensation to those who lose their lives or properties to the wild animals. Prahlad Yonjan, a wildlife specialist, says that unless the people living around the national parks get compensation, they cannot be expected to cooperate in the conservation activities.

In the past custom officials have seized a huge amount of tiger bones in the himalayan district of Nepal, rare tortoises in Bhaktapur and Thankot in Kathmandu, leopard in Kathmandu, and fur from Tibetan antelope at the Nepal-China border. It suggests that there is an easy access of illicit wildlife pro-ducts from Tibet and India through Nepal. It is suspected that the products such as tiger bones, rhino horns and skin are smuggled to Tibet, Korea, Hong Kong and China through Nepal whereas, products from Tibet like musk deer and antelope smuggled to Kashmir, India via Nepal.