Five hydropower projects and large human settlement along Araniko highway should not have been there in the first place, says expert 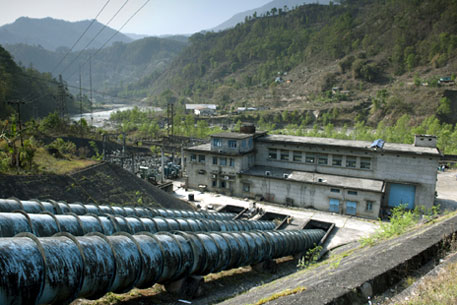 The landslide in valley of Sun Koshi mountain river in Sindhupalchowk district in Nepal has triggered an intense debate on unscientific and haphazard development in the geographically unstable regions of Nepal. The flooding and landslide in the region has transboundary impact, with Bihar facing flood threat. Nepal's Araniko highway runs through the region and is a crucial link to China.

This is not for the first time that the landslide caused floods in the region. In 1987, a major landslide in the Sunkosi region led to floods that killed 98 persons. Similar disaster hit in 1982 in Balefi , along the river, that killed 97 persons. In 1996 in the Larcha area in the same district, a landslide killed 54 persons.

Arun Bhakta Shrestha, an expert with International Centre for Integrated Mountain Development (ICIMOD), said, historically, the valley around Sun Koshi is highly unstable, in geological terms. “Glaciers and lakes on the northern side of the valley make it more prone to disaster,” he told Down To Earth over phone from Kathmandu.

In the past few decades, a considerable number of houses, shops and hydropower plants have been built in the region. One of the major reasons for increase in human population in the region is construction of Araniko highway that connects India, China and Tibet.

Shrestha warns that construction of highways is not wrong but it should be constructed in a planned way after taking into consideration the geology and disaster vulnerability of areas. The worst thing that has happened is a large human settlement around the Araniko highway, he said.

Apart from the human settlement, there are five hydropower projects that are major suppliers of electricity to Nepal. This includes Bhotekoshi (45MW), Sun Koshi (10MW), Sanima Sun Koshi (2.5MW), Chaku (6MW) and Bhairabkunda (3MW); where power production has stopped due to the landslide at Juri.

Worst of the damage by the flooding, that has led to the creation of an artificial lake in the river, has been suffered by Sanima Sun Koshi Hydropower plant that is at present completely submerged. Two transmission towers of Bhote Koshi Hydropower have suffered major damage. The damage has resulted in power crisis.

“These hydropower plants should not have been constructed there,” Shrestha said.

The Nepal government might be able to drain the artificial lake that has been created because of the landslide. But experts say that long-term damage needs to be considered. The geographically unstable region of Sunkoshi has become more unstable after the landslide on Saturday.

“The human settlements need to be cleared permanently. And it’s crucial for Nepal government to seek international cooperation from India and China to come up with ideas to secure this region,” said Dave Petley, Wilson Professor of Hazard and Risk with the Department of Geography at Durham University in the United Kingdom, mentioned in his blog regarding his observation on Sindhupalchowk disaster.

Experts also said that early warning system has become need of the hour in the Sun Koshi valley. Early warning is crucial because flooding in the area directly impacts Kosi region in India. It also threatens existence of Araniko highway.