Industrialists in the Himalayan kingdom of Nepal deny they are to blame for the degradation of their environment and blame it instead on the government's shortsightedness. 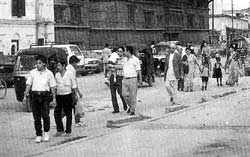 NEPALESE industrialists flatly deny their factories are polluting and at a recent seminar in Pokhara on the role of environmentalists in protecting the environment, they placed the blame squarely on the government in Kathmandu. They also ladled out some of the blame on public sector industries, motor vehicles and bureaucrats lacking in vision.

Speakers at the seminar organised by the Nepal-German Chamber of Commerce and Industries accused the government of not enacting proper legislation and for not setting pollution standards for industries. They themselves, the industrialists avowed, are committed to the imposing of environmental safeguards.

"What is our standard of pollution?" asked Hulas Chandra Golchha, a leading Nepalese industrialist. "The government should adopt its own standard because we have no pollution here and we should be least bothered by the alarmist approach adopted by some countries and international institutions."

A study conducted by the World Conservation Union has categorised 175 industries in Nepal as "hot" (major) polluters. Some of the industries in the Kathmandu valley involve carpet-washing and dyeing factories that have been established on river banks for easy disposal of effluents. In other instances, hoteliers have inserted 20-cm into aquifers that are about 365 m deep and mine operations are drying up the natural catchment area.

Surprisingly, though the seminar participants included Ram Yadav, member of the national planning commission and member-secretary of the environment protection council, he did not offer any clarification of the government's record on these issues.

The seminar adopted 14 resolutions, including establishment of a centre to provide information about green technologies and the creation of an environment forum for industrialists to establish rapport with the environment protection council. The Himalayalan paradise is getting ready to face the industrial age.