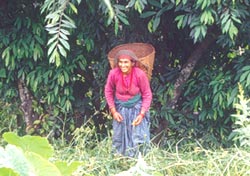 the community forest user groups (cfugs) of Nepal will now be required to cough up a steep 40 per cent fee on their total income from sale of forest products. The Nepal government brought in the levy through an ordinance promulgated on July 18.

It goes against the grain of a March 28 Supreme Court order that had quashed the government's decision to slap a similar tax on the cfugs of the Terai-Churiya range. The drastic measure also runs contrary to the tone of the country's recently unveiled budget, which talks about providing financial assistance to the communities to start forest product-based industries.

The cfugs are understandably distressed. "This is ridiculous," exclaims Dilraj Khanal, legal adviser of the Federation of Community Forest Users, Nepal (fecofun), an umbrella organisation of cfugs. "We are left with only two options: launching a ruthless campaign, or challenging the provision in the court of law," points out Khanal.

The origin of the controversy can be traced back to May 2000, when the government imposed a stiff charge on the incomes of the Terai-Churiya communities (belonging to the plains and foothills). fecofun had then moved the Supreme Court. The apex court ruled in the cfugs' favour, observing that the decision contravened the provisions of the Forest Act 1993 and Forest Regulations. It also noted that no tax could be introduced without a legal provision. Consequently not only have the authorities imposed the 40 per cent 'forest product fee', they have done it through Finance Ordinance 2060 to give the move an air of legitimacy.

The Director General of the Department of Forest, Jamuna Krishna Tamrakar, justifies the levy. "The cfugs are under the impression that the entire income from forest products is rightfully theirs, but this is not correct. The land belongs to the state and each and every citizen of Nepal," asserts Tamrakar. fecofun chairperson Bhim Parsad Shrestha feels that the levy is too stiff and that it should not cover total sales. Tamrakar is of the view that if the community members do have a genuine problem, the provision can be reviewed.

Waxing eloquent on the government's decision, Krisna Chandra Paudel, joint secretary, environmental division, ministry of forest, says its objective is to ensure that the benefits of forests percolate down to every citizen of Nepal. Tamrakar adds: "The money collected would be utilised for reforestation."

Mohanman Saiju, former vice-chairperson of the National Planning Commission, however, opines that the step is fundamentally wrong. "The local people will no longer be interested in protecting forests," warns Arjun Dhakal of the Nepal Forum of Environmental Journalists, a non-governmental organisation. It is noteworthy that more than 1.3 million households, organised into upwards of 12,560 cfugs, carry out conservation activities on about 1 million hectares of forestland in Nepal. The cfugs invest the income from community forests in running local schools and healthcare centres, and renovating irrigation canals.