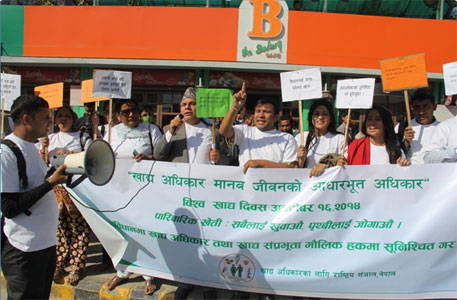 As Nepal’s political parties struggle to reach a consensus on the country’s new Constitution, civil society has stepped up campaigning to demand that “Right to Food” be made a fundamental right. National Network on Right to Food (RtFN), a network of 70 civil society organisations, has held several rounds of meetings with the Nepalese Constituent Assembly. It has asked that the right to food, food sovereignty and food security be included in the Constitution so that economically disadvantaged sections of the society are protected against starvation and malnutrition.

“Right to Food needs to be clearly dealt with in the upcoming Constitution. These points should be in simple language, clear words, well-described and in a transparent way so that every citizen may understand their essence and claim her right,” said Birendra Adhikari, national programme coordinator for RtFN. He added that representatives of marginalised ethnic groups, vulnerable people’s organisations and rights-based organisations would be involved in the mission.

Nepal’s Interim Constitution, which came into force on January 15, 2007, and the Three Year Interim Plan of Nepal recognise food sovereignty and food security as a basic right.

“Constituent Assembly members have assured us of their commitment to include Right to Food in the upcoming Constitution, irrespective of contentions on the terminology,” said Shyam Kumar Basnet, secretariat member of RtFN and editor of national monthly magazine Hamro Sampada. “Food security is a very serious issue and Nepal remains one of the most food insecure countries in south Asia.”

The new Constitution will be a milestone in Nepal’s democratisation, which began with the signing of a historic peace agreement between the Maoists and the then government in 2006. But turmoil continues as the country has repeatedly missed deadlines for drafting of the new Constitution, the latest being on January 22, 2015. The ruling and opposition parties are sharply divided over various key issues like the federal structure and forms of governance. Last week, Nepal’s opposition front, which has boycotted the ongoing Constitution drafting process, rejected Prime Minister Sushil Koirala's call for a dialogue to resolve the political stalemate. Meanwhile, people have hit the streets in protest against the delay.