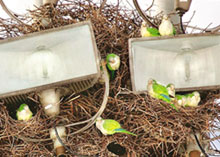 An animal rights group in the us has filed a lawsuit against United Illuminating Co (uic) in Connecticut, US, seeking to stop removal of monk parakeet nests from utility poles. Filed in the New Haven Superior Court by Friends of Animals, the lawsuit followed the recent removal of 103 nests in the Bridgeport and New Haven areas by the utility claiming the nests were hazardous. uic turned over 179 parakeets to the us department of agriculture, which killed the birds using carbon dioxide. The lawsuit seeks a permanent injunction against the capture and killing of the birds and wants the court to compel uic to take humane measures to dissuade the parakeets from building their huge nests on utility poles.