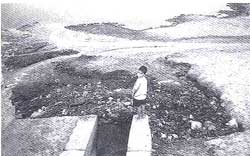 WITH THE dye industry being phased out in industrialised countries because of increasingly stringent effluent treatment and environment laws, the Indian dyes and dye intermediates sector expects to treble its exports in the next seven years to Rs 25 billion. A paper prepared by the Punjab, Haryana and Delhi Chamber of Commerce and Industry (PHDCCI) notes that due to stiff environmental regulations of the European Community (EC), "the dyes and dyestuffs industry is being vacated by European industry and this will increase the demand from developing countries".

Even at the present export level, the dye industry is responsible for several cases of severe groundwater and soil pollution. Near the village of Bichhri in Rajasthan, for instance, an H-acid plant has completely polluted the region's groundwater and soil within three years of its existence. H-acid is a dye intermediate whose manufacture was phased out in the EC some years ago.

This is significant in the Indian context as a large part of the dye intermediates is manufactured in the small sector, where worker welfare is generally ignored.