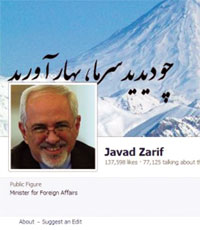 Iranian ministers are taking to Facebook like fish to water. Foreign minister Mohammad Javad Zarif, was the first. In August Zarif announced he and his children were updating his Facebook page. He quickly gathered 160,000 “likes” and became known as the “minister of Facebook”.

Several other members of Iranian President Hassan Rohani’s Cabinet followed suit, joining the global social-media site, which the Iranian government has blocked for years. According to the daily, Shargh, 18 Iranian Cabinet members have their own Facebook pages. Some of those named by Shargh later denied having pages.

This is being seen both inside and outside Iran—among the world’s most restrictive online censors—as an attempt by the new government to be more open and interactive with the Internet-savvy youth.