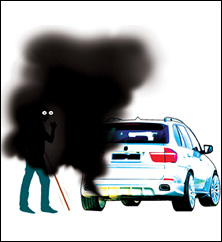 Pressure from the automobile industry is delaying implementation of tighter vehicular emission norms in cities across India. Though four-wheelers in 11 cities, including the four metros, switched from Bharat Stage (BS) III emission norms to BS IV on April 1, other cities supposed to make the switch from BS II to BS III norms have to wait. A draft notification of the government has proposed October 1 as the new date for implementing BS III norms.

The draft is in keeping with the demand of the automobile companies seeking deferment of the deadline set by the Centre’s auto fuel policy. The policy mandates all new four-wheelers upgrade technology to meet BS IV norms in 13 cities from April 1, 2010 while the rest of the country meets BS III norms. (Lucknow and Sholapur, two of the 13 select cities, have not implemented BS IV norms yet.) For two-wheelers and three-wheelers, BS III norms would apply in all cities.

When the Cabinet discussed the auto fuel policy roadmap with ministers on April 23, they could not agree on the date of transition to BS III norms. The environment and road transport ministers favoured implementation of the BS III norms in cities in phases, but the Ministry of Heavy Industries supported the automobile industry’s demand of a single deadline for all cities. Sources said the industry, especially two-wheeler manufacturers, is still unprepared for the technology transition. The final notification on the new deadline is likely soon, they added.

Oil companies, supposed to cap sulphur content to complement technology upgradation in vehicles, were the first to seek relaxed schedule for implementing BS III norms. This was after six refineries expressed their inability to supply cleaner fuel by April 1. The oil companies proposed a phase-wise schedule under which 16 states would get BS III fuel supply by June and the rest by October 1. But the phase-wise plan did not suit the auto companies which apparently wanted to continue selling BS II vehicles till October even in those areas where cleaner fuel would be available from June.

The Lok Sabha standing committee on petroleum and natural gas has reprimanded the government for working without foresight. The panel’s report said the government did not undertake mid-term corrective action to ensure timely implementation of the clean fuel policy.

The government has also failed to give clear instructions to the transport authorities in the 13 cities on when they should stop registering BS III vehicles. Transport authorities are bound by the Central Motor Vehicle Rules which mention April 1 as the date for starting manufacture of BS IV compliant vehicles but it does not bar registration of BS III vehicles, said a transport department official in Delhi. The ministry of road transport added to the confusion by issuing orders that authorities can register BS III compliant vehicles till existing stocks are exhausted.

The Delhi transport department is compiling inventory of existing stocks to ensure dealers do not procure more non-compliant vehicles, the official said. The stock-taking could have been avoided if the government had notified a deadline for registering existing stocks. Delhi stopped registering BS III four-wheelers from May 11 following directions issued by the Environment Pollution (Prevention and Control) Authority that has issued similar directions to the National Capital Region towns like Noida. The Society of Indian Automobile Manufacturers has, meanwhile, brought out a list of four-wheeler models that have upgraded to BS IV.