The government is preparing legislation to regulate the use of tubewells because water-tables in the country are falling rapidly. But the proposal could run into opposition from rich farmers. 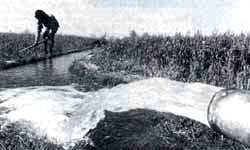 WITH DEPLETION of groundwater heavy in many parts of the country and rich farmers almost monopolising water resources, the Union government is renewing efforts to get states to control groundwater extraction. Last month, the water resources ministry circulated a model bill on groundwater use, making obtaining of permits compulsory and requiring users to be registered. The bill also prohibits sinking of wells in notified degraded groundwater areas and sets out punishments for violators.

Rapid depletion of groundwater has occurred mainly in Haryana, Punjab and Gujarat, where wells and tubewells are both used widely in irrigation. According to the Central Groundwater Board, the groundwater situation in 120 blocks, which form about 2 per cent of the total land area of the country, is critical as exploitation exceeds 100 per cent.

In over 500 blocks, exploitation is lowest at 65 per cent, though, at times, it can exceed 100 per cent (where consumption is so high even replenishment by rain cannot prevent water-tables falling).

The model bill comes 22 years after a similar bill was successfully opposed by rich farmers. Ministry officials consider the inclusion of drinking and domestic-use water in its ambit and the exclusion of wells dug for personal use by small and marginal farmers as major improvements in the proposed law. At present, poor farmers who want to sink wells have to apply for loans and are required to satisfy all technical norms.

Central Groundwater Board secretary S C Sharma noted the model bill, drafted to meet groundwater needs for the next 50 years, provides for mandatory registration of existing groundwater sources with a government agency that is to be set up in each state.

However, water resources experts contend the bill, like its predecessor, is unlikely to resolve groundwater problems. Both B D Dhawan, professor at the Institute of Economic Growth, and John Ambler of the Ford Foundation say the bill seeks to tackle groundwater misuse through administrative means only. Dhawan said the bill, if enacted, would only give birth to another set of inspectors and no way to monitor their work. Referring to the government's intention to monitor the 12 million-plus pump-operated wells in the country, Ambler asked, "Does the government have the necessary infrastructure?"


Maria Saleth of the M S Swaminathan Foundation in Madras says only popular participation can ensure disciplined groundwater use, because community pressure is more effective than legislation. Ambler agreed, and added if the bill addressed proprietorial issues concerning groundwater, "many problems, like irrational use, could be sorted out."

But Dhawan expressed doubt about this, as well. "It may be successful in states like Gujarat and Maharashtra, where village communities are effective." But he warned that in Bihar and parts of north India, where caste wields primary influence, community ownership could lead to further tensions.

Ambler argued it would be easier to administer crop patterns in notified, degraded groundwater areas than attempt to influence water use. But Dhawan had reservations about this approach, too, saying farmers in the United States chose to grow water-intensive crops that fetch high market prices and pay the fine for doing so.

Experts from the government and outside agree the bill will be resisted in most states by rich farmers. "The previous bill was not acceptable to most states. Even in Gujarat, where it was introduced in the assembly, Mehsana farmers blocked it. If anything, the rich farmers' lobby has become bigger and stronger in the last 22 years," said an official who asked not to be identified.