Over the past few months, Rachel Biderman Furriela -- a Brazil-based lawyer and activist -- has been punching the keys of her laptop furiously. She is busy acknowledging congratulatory mails from her network of friends -- an international group of lawyers working on green laws 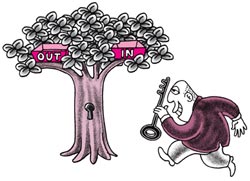 Over the past few months, Rachel Biderman Furriela -- a Brazil-based lawyer and activist -- has been punching the keys of her laptop furiously. She is busy acknowledging congratulatory mails from her network of friends -- an international group of lawyers working on green laws. The plaudits follow Brazil's finally passing a law that grants the public access to any kind of environmental information possessed by the government. For Furriela, this historic development bears significance because she played a key role in the evolution of the act -- a nearly-half-a-decade-long process. For the Latin American nation, too, it is a landmark event -- an arguable first in environmental legislation among developing countries.

Law No 10560 came into effect on April 16, 2003. The decks are now being cleared for its implementation. Considering that Brazil does not even have a general 'right to information' law, this is a commendable achievement.

John Pendergrass of the Washington-based Environmental Law Institute describes the prevailing conditions: "Till now it was nearly impossible to get government departments to divulge information pertaining to any environmental issue. The system just did not exist to allow public access to records. In order to extract even elementary information from the Brazilian bureaucracy, one had to be aware of the exact name and location of the document and seek sanction from a high-level authority as well."

A cynic might be tempted to say that this is true for almost the entire developing world today. But Brazil is besieged by a plethora of environmental and geopolitical problems -- from mining, deforestation and burgeoning industry interests, to an intrusive and overbearing neighbour ( read: the us).
The law states that the "organisations and entities of the public administration part of sisnama (the National Environmental System, which is the executive body that manages all green issues) are obliged to permit public access to documents, procedures and any type of administrative documentation that deal with environmental matters. (Further, they have) to disclose any environmental information under its guard in written, visual, audio or electronic format..."

It mentions that information regarding the following must especially be made public:

• Policies, plans and programmes that may have an environmental impact

• Results of monitoring and auditing of pollution control systems and polluting activities, as well as data referring to plans and actions related to recuperation of degraded areas (a major issue due to the large-scale mining in the country)

The legislation gets further teeth from Article 3 that says: "... In order to guarantee the application of this law, the public authorities may demand the disclosure of any type of information from private entities ... about the actual and potential environmental impacts of the private entities' activities...." Fernando Tabet, a senior lawyer based in Sau Paulo, explains: "This law is a potential powerhouse driving the right to public access to information. The industry has thus far remained unforthcoming on the pretext that the data belongs to a private entity. But now the companies will be on the defensive. They will have to justify why any information should be withheld from the public. It will be a complete change in the way proprietary rights over information are looked at in Brazil today."

Earlier, a member of the general public had to take written consent from the company to secure facts and figures regarding its operations from the government. "Henceforth, if a company possesses data generated for its internal use regarding pollution from its product, the government can be made to secure the information and disclose it to the public," elaborates Tabet. This, many critics believe, could be the most revolutionary idea if implemented in earnest.

The act also ensures that the bureaucracy doesn't raise the bogey of administrative procedures to deny the public access to information. In fact, the government, too, will now be compelled to be more candid on some environmental aspects.

sisnama would be required to publish in its official gazette and elsewhere reports containing the following information:

• Licensing requests, permits and pleas for renewal of permits

• Agreements for changes in environmental conduct

• Administrative appeals and their decisions

• Filing of environmental impact assessments and results of their analysis


Though Brazil has set a precedent with the new law, the situation is unlikely to change overnight. Realistically, neither will the public be given absolute rights nor would all restrictions to accessing records be lifted suddenly.

The Brazilian system for environmental administration constitutes sisnama which comprises a Superior Council (Government Council), an advisory and decision-making board (conama), a central body (environment secretariat of the President of Brazil) and an executive arm (Brazilian Environmental Protection Agency and Renewable Recourses or ibama). A debate is currently on whether the people will be able to know about matters pertinent to the environment but outside the purview of these departments. Tabet takes a sanguine view: "This should not be a problem. Relevant documents in all sections of the government will be made accessible." A lot would depend on the detailed rules and regulations that are to be drafted within a year to enforce the legislation.

"In Brazil, the federal law lays down the general articles; it does not go into specifics. It is the states and municipalities which then enact regulations to enforce the federal law in letter and in spirit," points out Tabet. "So this act should have a cascading effect in the states. In pursuance of this, the government has recently enacted a law making it mandatory for all agencies to divulge information regarding genetic patrimony," he reveals.

But other experts are less optimistic. They opine that despite Brazil's beating its Latin American cousins at legislating and its borrowing ideas liberally from Europe's Aarhus convention (see box: In Europe's footsteps ), implementation remains dismal. Pendergrass exudes scepticism: "At the end of the day, a law is only as good as implemented." Shekhar Singh, co-chairperson of the International Task force on Transparency, a multilateral body that advocates the right to information, also strikes a note of caution: "We have seen from the South Asian experience that the fine print matters the most. In the Brazil's case, the problems may be compounded because it does not have any provisions to penalise officers who default on the articles of the law."

All the same, Singh admits that Brazil's law scores over those of other developing countries in that it was notified within 30 days of being passed by parliament. As against this, India's Delhi Right to Information Act came into force nearly a year after being legislated.

In Brazil, the actions of the government agents are governed by a separate piece of legislation whose implementation has been specious, avers Tabet. He remarks: "Under the new act, one cannot yet think of prosecuting government officials for clamming up. They are steeped in the old bureaucratic mould. It shall take some time to usher in change." The wait might be worthwhile, considering the effort that went into getting the legislation enacted in the first place, feels Fabio Feldmann, the author of the original bill and a member of the Brazilian congress.

A source within ibama alleges that much was given away during the protracted negotiations to get the bill passed. "The law was based on a resolution adopted by the state of Sau Paulo. So it incorporated some issues that had already been tested in practice. Anyhow, there are definitely failures in the final text that was approved," contends the ibama insider. But David Hathaway, a renowned activist from Brasilia, counters, "It's a start, however timid, and in that it is good."

Brazil has taken the first step. The trudge ahead may be uphill but lawyers, activists and environmentalists such as Furriela and Feldmann promise to continue spearheading the people's empowered movement against environmental degradation.