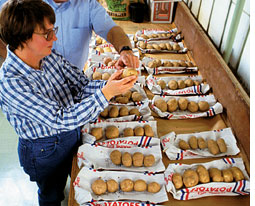 2008 has been declared the year of the potato by the un. You can expect lots of new research projects, films and exhibitions on one of the most important staple crops. Over the years, breeders have used physical features or morphology of the plant to select varieties for different uses: human consumption, industrial processing or feeding animals. Scientists at the University of Wisconsin, usa, suggest the potato (Solanum tuberosum) be divided into four species. They reason this will help breeders be more specific in their selections, thereby paving the way for more vigorous varieties.

The potato's centre of origin is in and around Peru in South America, from where it has spread across the world over the past five centuries. David Spooner and colleagues at the horticulture department at Wisconsin have been conducting research on the species boundaries and evolutionary history of wild and cultivated potatoes.

Almost 5,000 potato varieties are cultivated worldwide; 3,000 of these in the Andes mountains alone. Then there are are 200 wild varieties. While selection and breeding based on physical characteristics is enough for farmers, it is not enough for scientific classification. "Morphology is a poor character to define most species or cultivar groups," writes the Wisconsin team in its paper in the journal PNAS (December 4, 2007). There should be an elaborate classification to distinguish the genetic traits of different varieties. At present, scientists count the number of similar chromosome sets--chromosomes come in sets of different numbers like two (diploid) or four (tetraploid)--in a cell of one variety to distinguish it from another. This is called the ploidy, a simplistic approach to identify varieties into broad categories. But chromosome numbers for most cultivated potato varieties are not available, making this approach unreliable. "Ploidy has been of great importance in the classification of cultivated potatoes but our results show so many exceptions that it is a poor character to define gene pools," the paper says.

The way out, they suggest, is the genomic approach: instead of only counting the chromosome sets, it requires identification of the smaller components of chromosomes called 'bases'. They also propose cultivated potatoes be reclassified into four species because there is much confusion in identifying potato varieties collected over three decades even at the International Potato Center in Lima, Peru. "Potato gene banks are in great need of an integrated and comprehensive programme ... Such a multicomponent system will serve the breeding community much better than the unstable traditional classifications."

K R Dhiman, head of India's Central Potato Research Station at Kufri, Himachal Pradesh, believes Spooner's proposal should be used to supplement existing methods: "It promotes a molecular or a genetic basis to determine the dissimilarities in the genes between and within species. It will improve breeding practices."