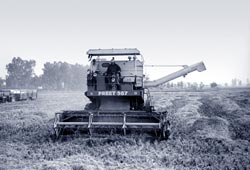 the seeds of a novel programme to reduce the rice-wheat predominance in Punjab's cropping pattern have been planted. The state recently launched a multi-crop, multi-year contract farming programme. It seeks to convince Punjab's farmers - who currently follow the rice-wheat cropping pattern - to switch over to alternative crops. The objective of the exercise: reversing the damage done to the soil, groundwater and environment by intensive cropping.

The programme will be coordinated by state-run Punjab Agro Industries Corporation (paic). "The idea is to increase the land under alternative crops to more than 6-8 lakh ha over a period of five years," reveals A S Saroj, assistant managing director, paic, and in charge of the scheme.

Perks for farmers who opt for contract farming include high yielding varieties of seeds, technical supervision and assured buyback of the entire produce at a price comparable or better than that of wheat and paddy. " paic will be the facilitator. Farmers for the programme will be identified from different districts of the state as per crop suitability, and the area under cultivation will be decided according to the requirement of the industry," points out Saroj. The farmers will be placed under an agreement to grow the alternative crops for a minimum period of five years.

The move indicates that the Punjab government has, at last, woken up to the widespread environmental degradation in the state. The wheat-paddy cycle being followed since the Green Revolution days has resulted in severe land degradation, a plummeting groundwater table, and environmental pollution from heavy fertiliser and pesticide usage. The state has the highest cropping intensity in the country (two or more crops are grown on most tracts in a year). This leads to severe soil nutrition depletion.

In this scenario, will the new programme bear fruit? "Only if the government takes care that the farmer who opts for crop diversification gets adequate returns," opines Dipender Singh Kamra, legal adviser to the Bharatiya Kisan Union in Chandigarh, who is also a farmer. "Since crop prices are determined before the particular cropping season, farmers can make a quick cost-benefit comparison before opting for contract farming," says G S Nanda, director (research), Punjab Agricultural University, Ludhiana. But, he admits that growing alternative crops should be lucrative for the farmer.

However, Kamra is sceptical. He feels it will not be all that easy to persuade the state's farmers, because whatever little profit they earn comes from growing rice and wheat. In real terms, they have been incurring losses from other crops. The other cause for concern is that from this season onwards, the Punjab government has decided to charge farmers for water and electricity used for crop cultivation.

Unless contract farming fetches them a fair price, farmers will revert to the rice-wheat cropping cycle, which can prove disastrous. They could otherwise resort to subsistence farming (low level of agricultural activity with reduced or no use of fertilisers and costly high-yielding varieties). This will have an adverse effect on the food security of the country, avers Kamra. Punjab, which occupies a mere 1.5 per cent area of the country, cultivates 21 per cent of its wheat, 9 per cent rice and 15 per cent cotton. The state at present contributes 50 per cent of wheat and 40 per cent paddy towards the central grain pool (used for public distribution through fair price shops).

It is evident that the economics of the scheme will decide its fate. And only time will tell whether it is innovative enough to alter the traditional mindset of the Punjab farmer.