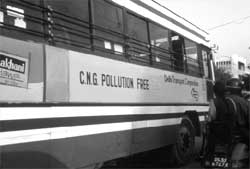 Although the Supreme Court (sc) has extended the deadline for conversion of all Delhi buses to Compressed Natural Gas (cng) to January 31, 2002, it has not diluted its order disallowing use of any other conventional fuel to run the public transport bus fleet. The onus now lies on the state government to implement the order. The sc has also asked the Delhi government to file status report of phasing out diesel buses from Delhi's roads every four weeks starting from October 18, 2001. The next hearing has been scheduled for February 8, 2002, one week after the deadline expires.

During the October 18, 2001 hearing, the Union government came under a lot of flak for not having ensured enough cng supply for public transport. Earlier, the Union government had told the court that there was not adequate amount of natural gas for Delhi transport sector but later it took a u-turn to say that there would be no difficulty in providing cng until April 2002. The Centre claimed that it was in a position to dispense 0.44 million metric square cubic metres per day (mmscmd) of gas while the total gas being dispensed was only 0.33 mmscmd. But this time it was the Delhi government, which cried hoarse about the inadequate supply of natural gas in the city.

Harish Salve, amicus curae, displayed copies of Down to Earth (September 30, 2001 issue) to point to the calculations made in the magazine that prove there is enough cng in the country and it is only a question of allocating more cng to the transport sector in Delhi. Justice B N Kirpal stated that more natural gas is being allotted to Mumbai than Delhi even though the cng demand is far greater in Delhi.

Salve also drew the judges' attention to the recent report published by the Centre for Science and Environment, in which three experts on cng from Sweden, Germany and the us have clearly said that the cng programme in Delhi is poised for outstanding success. While Delhi government said that it would take another five years to convert all buses to cng, affidavits filed by manufacturers like Telco and Ashok Leyland revealed that 10,000 cng converted buses could be on the Delhi roads by February 2002.