After the quest for Higgs Boson, next set of experiments at the LHC will be to test the theory that predicts a whole range of particles that haven’t been seen but would have been produced during the Big Bang 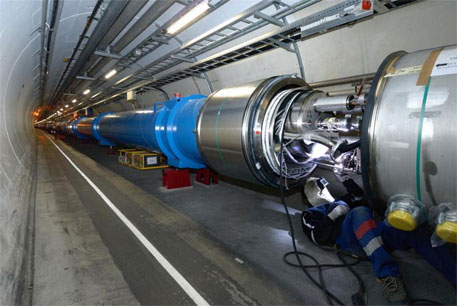 After a long sabbatical, the world’s largest particle accelerator – the Large Hadron Collider (LHC)—at the European Organization for Nuclear Research (CERN) near Geneva is gearing up for its second innings.

The LHC, which has provided important insights to physicists since going into operation in 2009, especially concerning the Higgs Boson, was shut down for two years from February last year for maintenance.

Phased restart
Speaking to Down to Earth, James Gillies, head of communication at CERN, said, “LHC is a machine and all machines need maintenance. This one is particularly long because all the other accelerators at CERN have been shut down for maintenance too.”

A long shutdown will ensure that breakdowns like the one in 2008, soon after the first operational cycle of LHC began, do not take place again. The main repair work revolves around repair and consolidation of joints between over 1,600 magnet units in the collider.

While the collisions won’t begin until February next year, the phased restart of the machine has already begun. Gillies, says, “The LHC operates at -271 degree Celsius. It takes a long time to bring it to the operating temperature from room temperature.”

LHC is divided into eight segments, and all the segments are cooled independently. The cooling is expected to be over by the end of this year.

New goals
It requires a humongous amount of energy to run the LHC. It’s currently being run at 8 TeV—equivalent to the output of two engines of an airbus A380. CERN plans to operate it a much higher energy – around 13 Tev – this time around.

“Running the collider at such high energy is important. That increases discovery potential because if you’re looking for new particles, you need enough energy to produce them,” said Gillies.

The focus of the next set of experiments at the LHC will be to test the theory of Super symmetry – an extension of the Standard Model of Particle Physics – that predicts a whole range of particles that haven’t been seen but would have been produced during the Big Bang. “These particles are still there, but we’re not able to see them. They could constitute the dark matter, which forms 25% of the universe,” Gillies said. “We hope to go beyond the Standard Model and start exploring the 95 per cent part of the universe that we don’t know about.”

He added the probability of creating a Higgs particle with every collision increases if the speed is upped. “Right now the two experiments working on the Higgs – ATLAS and CMS—have accumulated 1,400 Higgs particles candidates from billions of collisions, which is not very many,” Gillies said. “Next year, we hope to record many more candidates, so that will allow us to make more precise measurements on the Higgs.”

In a major scientific breakthrough, the discovery of the Higgs Boson was announced by ATLAS and CMS experiments in July, 2012. “It has been detected and identified, absolutely positively as Higgs Boson. It has been shown to interact with all kinds of particles it is known to interact with,” says Gillies. Now, the CERN scientists hope to study in more detail its interactions with other particles.

Another important finding concerning Higgs Boson was released close on the heels of Heuer’s announcement. In a paper published in Nature Physics on June 23, CERN scientists reported that the Higgs Boson decays into fermions, just as the Standard Model of Physics had predicted.

India and CERN
Currently, CERN has 21 member states, including Denmark, the United Kingdom, France, Germany and Greece. Member states essentially run CERN. Countries with “Observer” status, such as India, Japan, the Russian Federation, Turkey, and the US, can participate in research activities, but don’t have decision making power. Associate members have more powers, but they still can’t vote. Serbia is the only associate member right now.

Around the time ESOF was held, Pakistan was chosen as an associate member of CERN, a fact that Heuer specifically acknowledged at the opening ceremony of the ESOF. Pakistan has all of 18 users at CERN (as of January 2014), while India has around 153. It begs the question: why is India just an observer country and not an associate member yet?

On why India is not an associate member as yet despite its significant contributions to CERN activities, Gillies said, “We haven’t favoured Pakistan over India. We have had negotiations ongoing with the government and we’re open to have India on board.”

On why the application is held up, B Purniah, a senior official at DAE in India, informed over email: “The approval process has involved several discussions with all stakeholders and responding to their queries. Presently, it is in the approval stage.”

If India is promoted to associate membership,it would mean not only greater participation of Indian scientists at CERN, but the industry’s involvement in providing major infrastructure for the colliders.