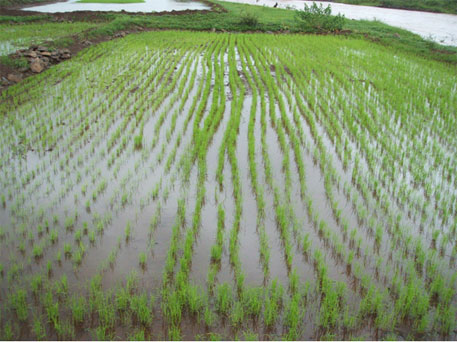 Farmers in Jharkhand have not derived significant benefits from the new Green Revolution programme initiated by the Centre in 2010-11, according to a report by non-profits working with the farmers in the state. The report claims that the government tried to implement the 1960s model of Green Revolution that increased agricultural production in Punjab and Haryana, without taking into account local conditions in eastern states.

Union Ministry of Agriculture’s Bringing Green Revolution to Eastern India (BGREI) programme was launched in Assam, Bihar, Chhattisgarh, Odisha, Purvanchal (eastern Uttar Pradesh), Jharkhand and West Bengal. With this initiative, the government hoped to improve production of crops, especially rice, and water resource management in the region. But despite budget allocation of Rs 400 crore, the scheme has not been able to bring about any significant increase in crop yield. Nor have there been any long-term strategies for water and soil conservation, says the report.

The report has been prepared by Abhivyakti Foundation, Pravah and Technology Resource Communication and Service Centre (TRCSC), which work with farmers in the Seraikella-Kharsanwa, Deoghar and Giridih districts of Jharkhand.

Krishna Kant of Abhivyakti Foundation says, “There is no significant increase in terms of productivity by using the hybrid or high yielding varieties of seeds as opposed to traditional ones. There is only a difference of 10-12 per cent. Also, the package of practices introduced through the scheme cannot be afforded by farmers with small land holdings. It benefits only big farmers who can pay the large input costs of fertilisers and pesticide sprays.”

Since the programme encourages monocropping of paddy, other allied agricultural activities which used to add to farmers' incomes, like fishing, are on the decline. While big farmers can afford high input costs, they are struggling to produce paddy because the required input materials are not provided on time.

The reports reveals that government departments handling the BGREI programme are facing a lack of manpower. This affects proper dissemination of information. There is also a lack of transparency in financial remuneration for farmers who participate in paddy planting demonstrations. Farmers are not aware of most of the infrastructure projects being undertaken under the scheme.

Other findings show that there are delays by the agriculture department in sanctioning of materials which adversely affects the sowing of seeds. Farmers are still not practising recommended ploughing techniques in rice fields. Traditional water conservation measures used by farmers are not being considered viable despite their success and low cost.

Anshuman Dash of German development agency Welthungerhilfe, which promotes efficient use of locally available resources in Jharkhand under its Sustainable Integrated Farming System programme, says, "If you try to follow the Punjab model of the Green Revolution in eastern India, it is bound to fail. Jharkhand is primarily composed of fallow land, it is not resource-rich like the Gangetic plains. The focus here should not only be on rice but on other crops like pulses and millets."

He adds that water conservation measures taken under the BGREI are unplanned, and that the water bodies dry up immediately after the monsoons.

Putting agriculture on the takeoff trajectory: Nurturing the seeds of growth in Bihar, India

Constraints and potentials of diversified agricultural development in Eastern India