135,000 affected by chikungunya disease, government yet to assess gravity of situation 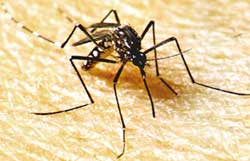 after a gap of 33 years, an outbreak of chikungunya -- a rare mosquito-transmitted disease -- has hit Maharashtra, Andhra Pradesh (ap) and Karnataka. who fears Orissa has also been affected. Up to 135,000 people might be affected.

Health officials in Maharashtra say about 70,000 people are feared to have contracted the disease between January and March of 2006. Media reports say Andhra Pradesh has 25,000 cases and Karnataka 36,000. No comprehensive government assessments exist.

In Maharashtra, 10 districts -- including Latur, Beed, Nashik, Ahmednagar and Solapur have reported cases showing chikungunya symptoms, but it's hard to ascertain how many actually have the disease.

"We have received around 50 representative blood samples from each affected district of Maharashtra. Of these, 240 tested positive for the chikungunya virus," says Akhilesh C Mishra, director, National Institute of Virology (niv), P une. niv is the only institute in the country that can conduct tests for the disease. "The figure is high, given the fact that niv has just received representative samples. Many samples have not been collected correctly. We can declare the disease an epidemic," Mishra adds.

Keeping in mind the fast spread of chikungunya -- it was first reported from Nashik in January 2006 -- Maharashtra chief minister Vilasrao Deshmukh recently convened a high-level meeting to discuss preventive measures. But all that transpired was that blame was laid on water stored for days together in household tanks, which provided a breeding ground for mosquitoes. This is ironic: Marathwada faces acute drinking water shortage and almost all households store water.

In ap, the disease has hit Anantapur, Kurnool, Kadapa, Chittoor, Nalgonda, Prakasam and Guntur district, among others. Of the representative samples sent to niv, 139 cases confirmed chikungunya, say media reports.

Karnataka has been affected since December 2005. It is learnt that at least 15 people are suffering from chikungunya fever in Bangalore alone. Blood samples have been sent to niv for confirmation. Though niv has not received any sample from Orissa, who suspects around 4,904 people suffered from the fever between February 27 and March 5, 2006. who has issued an advisory for tourists, saying many countries in the southwest Indian Ocean, including Mayotte, Mauritius and the Seychelles, have also reported chikungunya cases since January 2006.

The disease is characterised by a sudden onset of fever, chills, headache, nausea, vomiting, joint pain and rashes. Dengue has similar symptoms making it difficult to make accurate diagnoses. An immunological test, elisa (enzyme-linked immunosorbent assay), is used to identify the virus. But it is possible only when the disease is in an advanced stage and the viral load high. For early detection, pcr (polymerase chain reaction) tests are carried out. "But these tests are expensive and the government has not allotted any special fund towards it," says Mishra.

In the absence of any specific medication, treatment usually includes bed rest, high intake of fluids, and mild painkillers. "Patients are mostly treated on the basis of their symptoms. Control measures include ensuring that the vector population is reduced," says Prakash Doke, director, directorate of health, Maharashtra. In the mid-1980s, scientists at the us Army Medical Research Institute of Infectious Diseases had developed a vaccine. Though it was effective in trials, it has not been commercialised. Experts at the Government Ayurvedic Hospital Erragadda, Hyderabad, claim to have formulated a drug that can cure patients in five days.