A styrene maleic anhydride 'plug' has few side-effects and is reversible. 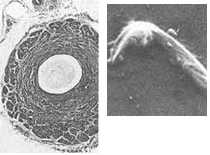 A CHEMICAL used originally to kill bacteria in drinking water is now proving extremely effective as a male contraceptive.

S K Guha, who is a professor at the biomedical engineering department at the Indian Institute of Technology and the All India Institute of Medical Sciences, both in Delhi, and his colleagues have found that when styrene maleic anhydride is injected into the vas deferens -- the tubes through which sperms pass on their way out from the testes -- it blocks the tubes and renders infertile the sperms that try to slip past.

"Our technique does not entirely block the sperms' passage," Guha explains, "but those that escape are rendered infertile." The chemical causes the head of the sperm to burst, releasing the enzymes that are essential for the sperm to break into an egg. So, even if sperms reach the egg, they are reproductively useless.

Guha adds, "The greatest advantage of this approach is that unlike other contraceptives that affect the entire body, its effect is localised, which means there are very few side-effects." Preliminary results of Phase I clinical trials carried out on 46 men bear this out. The team has recently received permission from the Drug Controller of India to carry out Phase II trials, in which both the efficacy and safety of the drug will be tested on a larger number of men. Also, the men on whom Phase I trials were conducted, will be monitored for 15 years to ensure that the contraceptive is indeed safe.

Guha says the effect of styrene maleic anhydride can be reversed by injecting a solvent that dissolves it. Furthermore, none of the subjects in the Phase I trial complained of diminished libido, which is a major problem with hormone-based contraceptives, he claims. Guha has been approached by several Indian pharmaceutical companies interested in producing this contraceptive, but has yet to make any commitments.