New isotopes on the block

A German heavy ion laboratory discovers new isotopes and also sights nickel 78, which has uses in nuclear as well as astrophysics 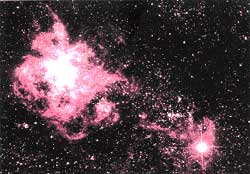 But now, Germany's heavy ion laboratory, the gsi in Darmstadt, is showing the way in seeking out hitherto unexplored domains in nuclear physics. A team of researchers from the gsi and Orsay in France have recently reported identifying some 100 new isotopes of medium mass. The isotopes were produced when uranium 238 ions were smashed into lead and beryllium targets ( Science , Vol 273, No 5274).

The synchrotron at gsi is the only machine in the world which could accelerate the heavy uranium ions to the high speeds required for the process. The instrument used by the scientists along with the synchrotron is the projectile fragment separator. This is basically a device (or rather, a series of devices) which pull the mixed fragments resulting from the collisions into separate beams based on the characteristics of the fragments. The separation allows for easier identification and study of the fragments.

As if discovering 100 new isotopes was not enough, the team has also sighted an isotope, nickel 78, for the first time. With its unusual configuration, this isotope could prove to be very useful in our attempts to understand nuclear structure.

Nickel 78 could also be the key to another totally different realm: astrophysics. In the universe, supernovae are exploding stars which give out more light than a whole galaxy. They are thought to be the last stages of life of certain kinds of stars. These explosions also result in the heavy elements (like iron and carbon) produced inside the stars being ejected out into interstellar space, where they can then be assimilated into other objects. The supernovae also synthesise heavy elements by a process of neutron capture called the r-process which traces a path through the table of elements. Nickel 78 is thought to be present along this path and it is for the first time that any of the heavy nuclei along the r-process has been observed.

This could prove immensely useful in our understanding of stellar evolution as well as supernovae processes. This is not the first time that gsi is in the news. The six heaviest elements known to humankind have been created here. With the boosting of its primary beam energy and related devices, it could not only be our best bet towards understanding the sub-microscopic realm of nuclear physics, but could also be a unique window into the mysteries of stellar evolution.